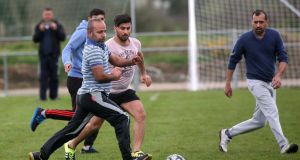 Syrian refugees and members of the Pakistani community in Ballaghaderreen take part in a 10-a-side soccer match at the local community playground on Saturday. Above is Sajjad Hussain, the Pakastani barber in Ballaghaderreen who organised the game, on the attack. Photograph: Brian Farrell

As another 40 Syrians arrived at the former Abbeyfield hotel in Ballaghaderreen around lunchtime last Friday, local Pakistani-born barber Sajjad Hussain, was on the phone arranging a soccer game between his community and the new arrivals.

Sport is big in Ballaghaderreen as the Syrians are finding out. Saturday’s game was the second in less than a week between a selection from the Emergency Reception & Orientation Centre (EROC) and the fit, and the not-so-fit, from the local Pakistani community.

Shairose Akram, who has the distinction of being the first Pakistani-born GAA player to win an All-Ireland medal (with the Mayo Under-21s last year) and is something of a local hero, togged out alongside his father, Muhammed, for the Pakistani side.

“We kept my father in defence out of the way,” he joked . “ It was great craic. Language is a barrier but sport is a good way of breaking the ice.”

The gesture from the Pakistani community was cited by Jacqueline Mullen, manager of the EROC when asked last week about supposed tensions sparked by the arrival of the Syrians.

A Pakistani businessman with no connections to the town raised eyebrows recently when he called on the authorities to build a mosque, saying Pakistanis had no place to pray in Ballaghaderreen. He also suggested that estate agents were discriminating against Pakistanis and said the town was like a desert with no facilities and would seem like a punishment for the Syrians.

It was suggested in some quarters that Pakistanis were jealous of the facilities being provided for the Syrians, who now number over 100, but Mullen said the reality is exactly the opposite.

“They organised a soccer game which was such a success that our residents wanted another one,” she said. “When we needed a buggy for a newborn baby, a Pakistani woman provided one and the Pakistani women want to come and meet the Syrian women.”

On Sunday, in an upstairs room in Spells bar in the town, 22 local people – two of them Pakistani – were doing a volunteering course as part of their effort to befriend and help the recently arrived Syrians.

Sajjad Hussain known by everyone in the town as “Saj”, who is one of those volunteers, scoffed at calls for a mosque.

“That man does not know what he is talking about,” said Hussain, who is secretary of the local Islamic Cultural Centre (ICC) where his community gather daily for prayer.

The ICC is based in a house bought for €45,000 after a major fund raising drive. In deference to his Catholic customers, Hussain keeps the jar of lollipops he has for young clients out of sight during Lent. What he doesn’t keep out of sight are the trophies won by the Ballaghaderreen cricket club he set up about eight years ago with local man John Corcoran, and which has won six Connacht titles.

After almost 11 years in Ballaghaderreen, Hussain says the community spirit in the town will be a salve for the Syrians after what they have been though.

“Some mothers had to put their children on boats even though there was no space for themselves,” he said. “If my little boy runs out on the street, I run after him. I cannot leave him alone for a few seconds because of the dangers.”

Jacqueline Mullen is learning a little about the lives of the people under her care , and was horrified recently by the trauma a fire drill caused. “I could see terror on their faces. The little children were roaring.”

Some of the new arrivals have been sharing their stories. “There is a lady with two children whose husband has been missing for five years. We have a couple who lost two sons . One man has shrapnel injuries,” said Mullen.

“These people did not know where they would be going. Their destiny is in the hands of others.”

Micheal Frain, who is head of Ballaghaderreen Town Team and chairman of Roscommon Leader Partnership, is proud of how his town has responded to the arrival of the Syrians but worries about the response of agencies such as the HSE.

But Frain cautions there needs to be State investment “outside the gates of the EROC”. He says that local doctors have been asked to see patients in the centre and at least one GP has had to cancel walk-in clinics, because resources are so stretched.

“The emphasis has all been on the centre, and I understand that, but there is a time bomb ticking in the community,” he warns. “There is a high level of unemployment and there are a lot of other foreign nationals in Ballaghaderreen . Doctors were already at breaking point and schools were under pressure. So yes there could be jealousy in the future if additional resources are not provided.”

The Syrians meanwhile hope to have another soccer match soon, if only to get payback for two defeats so far.

Ghassan, a 19- year-old Syrian, played with the Pakistani side on Saturday because the numbers were uneven but he did not mind. “We are all brothers,” he said.