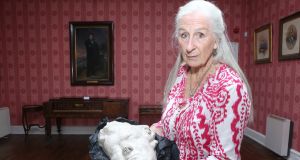 The Countess of Dunraven will present this Death Mask of Daniel O’Connell to the OPW at Derrynane House on Saturday. Photograph: Alan Landers

The death mask of Daniel O’ Connell is due to be presented to the Office of Public Works (OPW)on Saturday by the Countess of Dunraven at the ancestral home of the “Great Liberator”.

The plaster death mask has been in the custodianship of the Dunraven family for more than 160 years.

It is to be presented to the State body at the Daniel O’ Connell Summer School in Derrynane House.

Speaking to The Irish Times, Geraldine Dunraven, the Countess of Dunraven, said the Dunraven family of Derrynane cottage had been in possession of the death mask of the great liberator Daniel O’Connell for the past 161 years.

“We have been proud to be a possessor of such an item. We have decided to return this mask to its rightful home at Derrynane House, the historical home of the O’Connell family in this heritage week in 2019,” she said.

While it is unclear exactly how the Dunraven family came into possession of the mask, the countess said it related to the close friendship between the two families.

She said her husband’s ancestor, the third Lord Dunraven, was a personal friend of Daniel O’Connell.

“The third Lord Dunraven leased land from Daniel’s family and then when Daniel died, he bought the land in 1858,” the countess said.

“Dr Dan, who is the present Daniel O’Connell’s father, was a really special man and was a great friend of my husband, and also professor Maurice O’ Connell, who is a great historian at Harvard, and they were great friends. So the friendship has come all the way down the line.”

The countess said she and her husband had spoken about bequeathing the mask on several occasions before his death in 2011, and she and her daughter, Ana, finally decided now was the right time to do it.

Chairman of the OPW Maurice Buckley said Derrynane House was one of the great influences on Daniel O’ Connell’s life.

“Today Derrynane House is much more than a museum, it is a space that tells the story, from the cradle to the grave of the Liberator. This mask will be an incredibly valuable addition to the collection here and we look forward to making it central to the collection,” he added.

There is some minor damage to the nose of the mask, which the OPW intends to repair.

O’Connell’s family home in Derrynane, Co Kerry is now a museum dedicated to his life and achievements, under the care of the OPW. Following its repair, the mask will be placed on public display at the museum.

O’Connell died in 1847 in Genoa, Italy, while on a pilgrimage to Rome at the age of 71. His remains are buried in Glasnevin cemetery in Dublin.

He is known as “the liberator” because he fought for the rights of Irish people, while he attempted to repeal the Act of Union.

At the time of O’Connell’s death, it was not uncommon that a death mask would be made of a person’s face. Death masks were often used as a reference by sculptors and artists when creating busts and paintings and are also highly valued in their own right.

There is also a wax death mask of O’Connell on display at the National Museum in Maynooth.