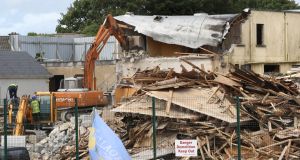 The walls have come tumbling down at the Warwick Hotel in Galway where tens of thousands of people danced and sang and shifted their way through their late teens and 20s.

The heart of Galway’s music and arts scene in the 1980s, 1990s and noughties has beat for the very last time and the demolition of the hotel on the road which snakes out from the city to the Salthill seafront is complete.

It marks the end of a long and storied journey for a hotel which hosted Coldplay, Snow Patrol, David Gray, New Order, Dinosaur Jr, the Wedding Present, the Housemartins, Kirsty MacColl, the Pogues, Fleetwood Mac’s Peter Green and Billy Bragg, as well as countless other artists who took to its ballroom stage in its heyday.

Almost every conceivable Irish act including Van Morrison, Christy Moore, Sinéad O’Connor, the Undertones, the Hot House Flowers, the Frames and Microdisney played in the hotel at least once. And if artists weren’t playing there they were drinking and dancing there.

For Galway bands in particular, playing the Warwick was a rite of passage and an essential stepping stone on the path to national and possibly international glory. The Sawdoctors – who described it as their “spiritual home”, the Stunning and Toasted Heretic were among the local acts to sell the venue out before finding bigger stages elsewhere.

Live music aside, it was one of the first nightclubs in the country to dispense with slow sets in the mid-1980s, replacing the schmaltzy chart music heard at other venues along the Salthill strip with the Stone Roses, Public Enemy, the Pixies, Grace Jones and the Sultans of Ping – with the odd dash of Abba’s Dancing Queen frequently thrown in to bring proceedings to a close.

It was inextricably linked to Galway’s arts community and famously hosted the welcome-home party for one-time Galway West TD and current President of Ireland Michael D Higgins after he was appointed minister for the arts in 1993 and it was at that celebration that the Sawdoctors debuted their irrepressibly riotous Michael D Rockin’ in the Dáil.

“The Warwick was party central,” recalled Galway Arts Festival founder and Sawdoctors manager Ollie Jennings. “There was nothing like it. It was a meeting place and a music venue and a club and an arts centre all rolled into one, even the bouncers took on legendary status. But it has had a slow death.”

Indeed it has. It closed its doors for the last time in 2010 after being sold to a company with plans to turn it into a nursing home, something which could allow at least some of those who danced there as young ones return as auld wans.

Built in the early 1930s, the Warwick became a landmark in the seaside town and was particularly popular among honeymooners, showbands and the gambling fraternity who would swamp the city during the Galway Races, routinely decamping to Salthill when the horses stopped running, for all night, high stakes poker games.

But the hotel’s personality changed in the 1980s after a DJ known universally as Doc to Galway locals approached then owner Austin Keogh with the idea of holding student nights in his ballroom.

“The slow sets and the pop classics were never really our thing,” Doc told The Irish Times. “We were catering for a market other clubs didn’t really know existed and just by playing the right music with the right attitude people started to go ‘out out’ to the Warwick.

“That was when ‘going out’ meant going for pint in town and going ‘out out’ meant you were going to Salthill,” he explained.

At one point there were more than 100 people employed by the Warwick and on some nights queues would start forming hours before the doors opened. December 26th was always particularly busy, Doc said.

“I remember we printed VIP passes to allow some people to get in early on St Stephen’s night but no one ever used them because they were afraid they’d miss the craic in the queue if they did. That was Galway for you.”

The success of the club nights allowed Doc buy the hotel off the Keogh family in 1994, after which he set about refurbishing its rooms and growing its entertainment offering.

All went well for more than a decade but then the financial crash brought an end to his plans for a substantial investment in the property and it was sold in 2010. “I do miss it, it was never just a job for me, it was a way of life,” he said.

“We’ve never really had the official Warwick reunion. I always said we’d wait until it was completely gone so I might have to start planning for that now,” he added.

If such a reunion ever does go ahead it would be hard to think of a venue big enough to accommodate all those who found love, had their hearts broken and danced their socks off in the west’s alternative ballroom of romance.