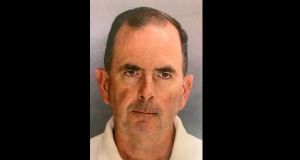 The district attorney’s office said Fr Joseph McLoone ‘held a position of leadership and his parishioners trusted him to properly handle their generous donations to the church’.

An Irish-American priest has been arrested for allegedly stealing almost $100,000 (€90,000) from his church and spending it on a beach house, travel and “on adult men with whom he maintained sexual relationships”.

The Catholic priest, who lives in Pennsylvania, but whose parents originate from Co Donegal, took over as pastor of St Joseph’s Parish in Downingtown, Chester County in 2011.

On November 2nd of that year, Fr McLoone opened an account at TD Bank, which he named the “St Joseph Activity Account”. Over the following six years, the priest diverted about $125,000 (€112,400) in donation cheques written to the church into the account, the complaint against him alleges.

It alleges Fr McLoone accomplished his theft through several means, including regular cash withdrawals and stealing cheques and cash collected for the All Souls celebration in November.

Authorities say the priest regularly withdrew cash in Ocean City, New Jersey, where he had a holiday home.

The district’s attorney’s office also alleges he made thousands of dollars in payments directly to men with whom he maintained relationships via Square and JPay online services, and that he doubled the amount he collected as a stipend for each Mass, wedding, and funeral held at St Joseph’s Parish.

The priest is also accused of making thousands of dollars in payments directly from the activity account to his personal credit cards.

Some of the diverted funds were later recovered.

District attorney chief of staff Charles Gaza said the priest “held a position of leadership and his parishioners trusted him to properly handle their generous donations to the church”.

“Fr McLoone violated the trust of the members of St Joseph’s for his own personal gain.”

The Archdiocese of Philadelphia said the priest was on administrative leave and it was continuing to co-operate with the authorities.

“The Chester County District Attorney’s Office is overreaching,” she told the newspaper. “They filed these charges based off speculation, conjecture, and innuendo . . . They won’t be able to prove them.”