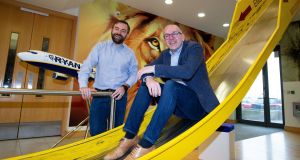 Irish data analytics company Boxever has signed a “significant” five-year contract with Ryanair, thought to be worth a multimillion figure to the technology company.

It marks the latest major airline to sign up with Boxever, which makes a technology that allows its users target customers with offers more effectively. It already counts Aer Lingus, Emirates, Flybe and Jetstar among its customers.

“It’s one of our most significant customers in terms of deal size and size of airline,” Boxever chief executive officer Dave O’Flanagan told The Irish Times. The company’s growth to date has predominantly been driven by the airline sector, but earlier this month it announced that it has signed a deal with AIB, and it is pursuing other clients in financial services as well.

Ryanair chief technology officer John Hurley said that the firm’s technology would play a part in the airline’s ambition to become “the Amazon of travel”, bundling ancillary services like hotels and car hire with its flights, as well as offering different paid-for extras such as priority boarding or other benefits for business travellers.

Using Boxever, he said, would help shift perceptions about Ryanair constantly bombarding their customers with offers and sales by targeting deals more effectively. “The vision here is to stop that happening. It’s more targeted, it’s more intelligent, it’s the right product at the right place at the right time, rather than everybody gets the exact same request,” he said.

“The customer receives the things they want, and are more likely to buy because the things that are presented to them are of more interest to them,” said Mr O’Flanagan.

Data analytics and artificial intelligence companies are becoming increasingly valuable as large corporates look to use the platforms to gather insights into their customers in a bid to chase bigger profits. Dynamic Yield, a competitor of Boxever’s which specialises in machine learning, was sold to McDonald’s last month for about $300 million (€266 million).

“We have a huge ambition for the business to be a significant Irish business growing globally,” Mr O’Flanagan said, dismissing the idea that recent contract wins would tempt the current owners into looking at a sale of the company. “We’re in the market to grow the business right now.

“Is there any opportunity to sell? Absolutely. Is there a desire to sell? No,” he said.

Data analytics companies are also facing increasingly onerous demands and expectations on data security from both regulators and customers. Boxever uses only anonymised data on those using its customers services, but O’Flanagan says that data security will be of paramount importance for the industry in the future.

“It’s about trust and transparency. If you’re really clear about what data you have about your customer, why you’re using it and how long you’re going to keep it, I think that engenders trust between the consumer and the organisation,” he said.

The proliferation and storage of vast amounts of consumer data has also raised security issues for companies like Ryanair, Mr Hurley said. “Every CTO or CEO is scared in the industry at the moment. We follow best practice, we have a dedicated security team, and night and day continuously worry about it,” he said. “We are a target.”

Boxever, which was founded eight years ago, is backed by venture capital firms Polaris and Frontline, as well as Enterprise Ireland. Smaller investors include the Bank of Ireland equity fund and Pageant Holdings. O’Flanagan said that the company plans to add between four and six airline customers a year, and continue moving into new sectors.

“We were six guys when we won our first contract with Air New Zealand. We won that contract against IBM, Oracle, all those guys who had big teams on the other side of the world; we did that from Dublin,” he said.