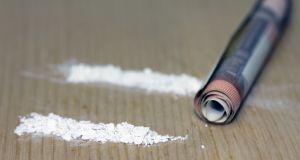 The number of people seeking treatment for cocaine addiction increased by over 30 per cent in a year and almost doubled since 2011, figures published on Wednesday show.

The data indicates problem cocaine use is growing with the economy, said Dr Suzi Lyons, chief researcher with the Health Research Board (HRB) which is issuing the figures.

At the same time addiction to other drugs, including heroin and cannabis, appears to be falling.

Cocaine users are more likely to be employed than the overall drug-using population. Some 33.5 per cent of those in treatment were employed compared with just 11 per cent of all drug users.

Cocaine users are also more likely to be male (81 per cent) than other drug users (72 per cent) and less likely to have ceased education before they were age 16 – 26 per cent compared with 35 per cent of all drug users in treatment in 2017.

Similarly numbers seeking help for heroin and cannabis addiction fell over this period, by 15 per cent and 21 per cent respectively.

The numbers presenting for treatment for the first time show similar divergences, going down for cannabis and opiate addition and up sharply for cocaine.

First-time treatment for cocaine use grew by 88 per cent, from 396 people eight years ago to 748 in 2017, the HRB figures indicate.

A separate December 2018 report from the European Monitoring Centre for Drugs and Drug Addiction reports “surges in cocaine availability across global markets” since 2016. It says there is about a 12-year lag between first-time use of cocaine in Europe, at on average age 22, and seeking treatment.

1 WHO warns of potential for ‘immediate second peak’ in Covid-19
2 Archaeologists are ‘quite sure’ they have found Red Hugh O’Donnell’s burial place
3 Coronavirus: No new Covid-19 deaths reported in State for first time since March
4 Unidentified man has been in Irish psychiatric hospital for 30 years
5 Coronavirus: What will reopen in Ireland’s phases to ease restrictions and what are the dates?
Real news has value SUBSCRIBE