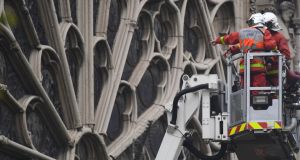 The Government will consider a review of fire systems at Ireland’s heritage properties in the wake of the devastating Notre Dame blaze in Paris, the Dáil has heard.

Taoiseach Leo Varadkar said such a review “could be a good idea” and he would consult the Ministers for Housing and Local Government and for Heritage about such a possibility.

He told Labour leader Brendan Howlin that a review had taken place of apartment blocks in the wake of the Grenfell tower fire tragedy in London.

Mr Howlin had asked in the wake of the Notre Dame fire if there are “plans for an audit of our own built heritage such as Dublin Castle, Christchurch or St Patrick’s cathedrals or similar structures across the country to ensure that they are equipped with the latest fire protection systems”.

He said what happened in Paris “should be a wake-up call” for Ireland’s heritage properties as he suggested a fund for both private and public sectors to “ensure we take preventive measures in advance”.

Mr Varadkar said there were no plans at present but it was a “helpful suggestion” and he would take it up with the relevant Ministers. “It could be a good idea.”

Mr Varadkar said the fire, during Holy Week, and in the lead up to Easter – the religious feast of hope and rebirth – was especially devastating.

Fianna Fáil leader Micheál Martin also extended sympathies to the French on the fire damage at the “iconic and historic” cathedral.

“Many of us experienced the joy of visiting it and we extend our sympathy to the French people,” he said.

Sinn Féin leader Mary Lou McDonald also voiced the sympathy of her party at the devastation caused and said she had no doubt the cathedral would be rebuilt. “The world looked on with horror at the inferno at Notre Dame Cathedral,” Ms McDonald said.

Labour leader Brendan Howlin said the cathedral, which had in 2013 marked its 850th anniversary, was a “world heritage site that we hope can be restored”.

1 Majority of Irish Covid-19 cases come from variant that originated in Spain – study
2 Cork shootings: Father and sons to be buried in two separate funerals
3 The real Contagion virus is out there and it’s causing virologists to worry
4 Coronavirus: Six more deaths and 866 new cases reported
5 Faizan Syed (6) and Asfira Riza (11) ‘greatly missed’ after their deaths in Ballinteer home
Real news has value SUBSCRIBE