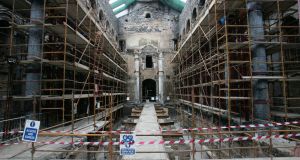 Scaffolding inside St Mel’s Cathedral, Longford, early in 2011, about a year after the building was badly damaged by fire. Restoration has since been completed. File photograph: John McElroy 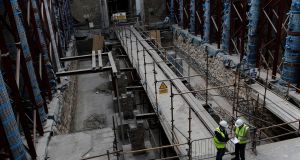 It will take years for Notre Dame Cathedral in Paris to be fully restored, according to an architect who worked on the restoration of St Mel’s Cathedral in Co Longford.

St Mel’s Cathedral was badly damaged in a fire in December 2009 and was fully restored five years later, at a cost of €30 million. The restoration was led by a team of five architects from Fitzgerald Kavanagh and Partners.

Ann Cuffe Fitzgerald, conservation architect on the project, said there was a “tight programme” in place for the restoration of St Mel’s.

“We really worked hard to meet that deadline, everybody was under pressure,” she told The Irish Times.

“It took us five years, which was fairly groundbreaking at the time. I would think it would be years before it [Notre Dame] comes back. It’ll probably be at least a year before they assess the damage and come up with a plan.”

Ms Cuffe Fitzgerald described the fire on Monday night at the medieval cathedral as “an astonishing tragedy for European civilisation”.

“It’s possible with modern techniques to replicate an enormous amount of stone and timber and so on, but what you are losing is the quality of authenticity. I think that’s an important one – the authenticity in any story,” she said.

“The handwork by the French through the 13th century and so on...we’ll never get that back, no matter what. The tools have gone, the people have gone. We can make it look the same but it isn’t authentic, we’ve lost the craftsmanship.”

Colm Redmond, lead architect on the St Mel’s restoration project, said an important factor along with damage caused to the roof and spire is the impact of the fire on the building’s stone.

“The effect the fire had on the stone is probably the most important thing. Different stones are affected differently by fire. Granite is a much stronger stone and it survives the fire very easily; marble, which would be found on altar areas and the steps – it turns into a kind of sugar and so it crumbles in your fingers,” he said.

“Limestone actually opens up like a book...The stone that was mostly used, from having been there before, is a limestone, a Caen limestone predominantly on the outer surface, but the walls on the inside would be quite different. I don’t know what stone is on the inside but it is a softer stone than St Mel’s.”

Mr Redmond added water damage to the cathedral, which celebrated its 850th anniversary in 2013, would likely be “considerable”.

“The thing is to allow it to dry slowly. If you were to go in with dehumidifiers or heating in there, the timber could distort and so forth,” he added.

Seamus Butler, who was the chairman of St Mel’s restoration committee, said: “Our understanding at the time is that it (St Mel’s) was the biggest restoration of a cathedral in western Europe. We dissolved the committee in January 2019 where the final retention was paid and we returned a sizeable sum to the parish for the upkeep of the cathedral in the future. So we did it on time and on budget.”