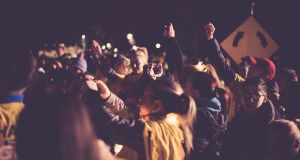 Over 150,000 people are expected to take part in the Darkness into Light walks in Ireland. Photograph: Pieta House

The annual Pieta House Darkness Into Light event will take place on Saturday morning, with close to 200,000 people expected to attend events across the world.

Organisers expect to raise a total of €3 million from the event, which consists of a 5km route and starts in Ireland at 4.14am.

The first international walk starts in Christchurch, New Zealand at 7.15pm GMT on Thursday and the last one will be in Vancouver, starting at about 1pm GMT on Saturday.

There is a significant increase in participants from last year, which saw 130,000 people take part.

Such is the “unprecedented level of support” this year the organisation has run out of the yellow t-shirts associated with the event.

People have been encouraged to bring last year’s t-shirt if they have one.

Over 150,000 people are expected to take part in Ireland, while the overall numbers are likely to be closer to 200,000 with those taking part abroad, Senator Joan Freeman told RTÉ’s Morning Ireland.

Pieta House provides free therapy to people who are in suicidal distress and those who engage in self-harm, or those who have been bereaved by suicide.

The 5km walk started modestly in 2009 with 400 people walking in Phoenix Park to raise funds and awareness of suicide in Ireland.

The event has grown to over 150 venues across the world, with walks taking place in Toronto, Sydney and Hong Kong this year.

Andy Sheridan, an architect who lost his brother Séan to suicide in 2015, has an exhibition of his photography at the CHQ Building in Dublin on Friday night, with all proceeds going to Pieta House.

“To go on the annual walk from Darkness Into Light is to appreciate just how many people are affected by all of this. The scale is overwhelming.

“So much resilience and collective strength in the face of so much sorrow and grief. The sun will rise again tomorrow. Life must go on.”

“I know from my photographic work that the smallest of light sources can make all the difference. It can utterly transform a shot. Scary, black night-time alleys can be rendered beautiful with a single lightbulb. Pieta House is such a lightbulb.”

You can register for the event here.