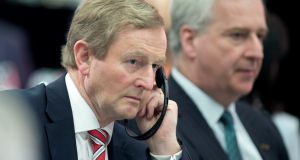 Taoiseach Enda Kenny appeared irritated at a question from an Irish reporter about his leadership. Photograph: Reuters

Minister for Housing Simon Coveney has insisted he will not pressure Taoiseach Enda Kenny into revealing his departure date.

Mr Kenny refused to answer questions about when he would stand aside as Taoiseach and party leader in Canada yesterday and questioned why reporters had travelled so far to ask him “that question”?

Speaking on Friday, Mr Coveney denied he was getting impatient with Mr Kenny’s refusal to outline when he would stand aside.

Mr Kenny has insisted he will not lead Fine Gael into the next general election.

The Minister, who is one of the frontrunners to replace him along with Leo Varadkar, said he was content to allow Mr Kenny address the issue when he is ready.

He added: “I trust him to do that. As I have said we are we are not going to have to wait too long for that. That is a call for the Taoiseach.”

The Taoiseach has told his party he would address his leadership intentions after the crucial European Union summit discussing Brexit, which took place last weekend.

However Mr Kenny is unlikely to inform his parliamentary party of his intentions this week due to the arrival of the European Commission’s chief Brexit negotiator Michael Barnier.

Mr Barnier is to address a meeting of the European People’s Parliament and a joint sitting of the Dáil and Seanad next week.

This is expected to delay any announcement by the Taoiseach on leadership.

Meanwhile, Mr Coveney also denied he was due to launch his own leadership campaign this week in Co Cork.

The Minister is due to address two meetings in his constituency, which had been interpreted as the firing shot in his campaign.

He said: “The leadership campaign has not been triggered. I think I would look a little silly if I was launching a campaign when we don’t even have a formal contest yet.

“What needs to happen is for any campaign to be credibly launched at this stage is for the Taoiseach to trigger a contest. That has not happened yet.”

1 Garda who investigated child abuse sues Garda Commissioner and State
2 Ireland’s official coronavirus death toll likely to have been overstated, report finds
3 Dara Murphy leaves EU job after just seven months
4 Bobby Storey: The IRA's planner and enforcer who stayed in the shadows
5 The abrupt end to Brexit talks is not only surprising but perplexing
Real news has value SUBSCRIBE