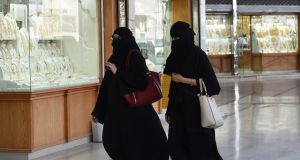 Taoiseach Enda Kenny has moved to clarify a claim he made Thursday that he had raised the issue of women’s rights during a trade mission to Saudi Arabia.

Speaking on Friday in Toronto, Mr Kenny said he had raised the issue of human rights with the Saudi Arabian authorities, which included women’s rights.

Speaking in Montreal the previous day, Mr Kenny said that he had raised the issue of women’s rights during a trade mission to Saudi Arabia a couple of years ago.

However the statement conflicted with what Mr Kenny told the Dáil at the time. On April 1st, 2014, under questioning in from Fianna Fáil leader Micheal Martin, the Taoiseach said: “The issue of women’s rights was not specifically discussed.”

The Government has refused to say if Ireland voted in favour of Saudi Arabia’s election to human rights body at the United Nations.

Mr Kenny also said that he would not address questions about his leadership while in Canada.

The leadership question was an internal matter for Fine Gael he said.

He said countries noted for their transparency, such as Norway and Sweden, adhered to the convention of not revealing how they voted when Saudi Arabia was elected to the UN Commission on the Status of Women.

“This is a convention which goes back to 1947 at the UN, and to which we have adhered since we joined in 1955. We have never once during that time disclosed a secret ballot vote; regardless of whether that vote would be viewed positively or negatively if it were disclosed,” he said.

“Every other country also adheres to this convention, including countries noted for their transparency, like Norway and Sweden.”

Mr Flanagan said the point of the secret ballot convention was to ensure that all countries, “not only the bigger or more influential ones”, could vote without the threat of undue influence or persuasion.

Asked if it would be normal practice for him to tell his Cabinet colleagues how Ireland voted, he said it would not.

“I will not be informing my Cabinet colleagues, for the reasons I’ve already outlined.”

In the Dáil exchange in 2014, Mr Martin had asked Mr Kenny to set out the persons with whom he held bilateral meetings when he was in Saudi Arabia and the issues that were discussed.

Mr Kenny responded: “During the meeting with Saudi Crown Prince Salman, I noted the election of Saudi Arabia to the United Nations Human Rights Council as a positive development in the area of human rights and expressed Ireland’s interest in working more closely with Saudi Arabia on human rights issues. The issue of women’s rights was not specifically discussed. We discussed issues around peace and stability in the region and these were also the main focus of my meeting with the Saudi Deputy Foreign Minister, Abdulaziz bin Abdullah.”

Questioned again by Mr Martin, Mr Kenny said: “While I said that the issue of women’s rights was not discussed specifically, we did discuss the issue of human rights generally. There have been a number of positive developments in recent years, but human rights remain a very contentious issue in Saudi Arabia and the rights of women is one of the areas of concern.”

Minister for Transport Shane Ross has objected to Mr Flanagan’s decision to keep Ireland’s vote a secret. On RTÉ’s Morning Ireland on Friday, Mr Ross said that “on an issue of this sort people are entitled to know how the country voted”.

He added: “I am going to ask Charlie Flanagan which way Ireland voted. I think it is not unreasonable to ask. The idea that it should be behind closed doors is an unacceptable convention.”

He said that the Independent Alliance would push “again and again” until they receive an answer.