Reach for the sky: Will Dublin’s high-rise dreams come to pass?

The 88m Tara Street tower will get planning permission, but don’t blame the planners 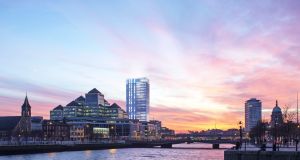 Artist’s impression of the Tara Street tower proposed by developer Johnny Ronan, which would be Dublin’s tallest building

What is it about cities that drives them to reach for the sky? In some cases, such as Hong Kong, it was inevitable because of an acute shortage of land. But in others, including Dublin, aiming high is a capricious choice rather than an absolute necessity.

Until the mid-1960s, Dublin’s low-rise skyline was not punctured by tall buildings. Then Liberty Hall emerged as a metaphor for modern Ireland, along with two commercial office blocks, O’Connell Bridge House and the awful Hawkins House.

During the “Celtic Tiger” era and the construction boom that followed it, serious consideration was given to the whole issue of building heights in the city, with a report by London-based consultants DEGW on where tall structures might be built.

It recommended that high-rise clusters should be located in Dublin Docklands, and around Heuston Station and other major public transport hubs, but not in the city’s historic core or, indeed, anywhere else. In a way, it was a case of “testing the waters”.

Then, in the mid-noughties, we were faced with a plethora of proposals for high-rise buildings, including a 32-storey residential tower at Heuston, the 120-metre Watchtower at the Point Village and, of course, the “U2 Tower” on Britain Quay.

The Progressive Democrats even canvassed the notion of a “Manhattan on the Liffey” plan for Docklands, with an image of dozens of skyscrapers, all jostling for attention. In effect, it would have been a recipe to replicate the congestion of Dubai.

There were also random high-rise eruptions in the suburbs, notably the Beacon South Quarter in Sandyford. And who could forget developer Seán Dunne’s plans for a “diamond-cut” 35-storey tower on the former Jurys Hotel site in Ballsbridge? Or the incredible plan to build the National Pediatric Hospital on a restricted site at the Mater, with a 16-storey building extending along Eccles Street for some 150 metres and highly visible from key locations, even from O’Connell Street?

All of these schemes were encouraged or at least indulged by the city’s planners, even though most never materialised. An Bord Pleanála refused permission for several of them, while the rest were killed off after the property bubble burst in 2008.

But the planners didn’t give up, and the city development plan they drafted made explicit provision for high-rise buildings in the vicinity of major public transport hubs, such as Heuston, Connolly and Tara Street rail stations as well as in Docklands.

The current city plan, which runs to 2022, also earmarks nine other areas for “mid-rise” buildings (up to 50m) while the rest would be “low-rise”. But in the latter case, anything up to 28m (equivalent to nine residential storeys) would be permissable.

As I’ve pointed out previously, this would be double the height of a typical Georgian house, which has defined Dublin’s scale for 250 years. And in many inner city areas with buildings of two or three storeys, the impact would be even greater.

Yet there are some cheerleaders for a high-rise future who still complain that planning policies in Dublin are too restrictive. The truth is that they’re not; indeed, it would be possible to get permission for high-rise buildings almost anywhere.

In this context, I accept the definition of a high-rise building as one that is “significantly taller than its neighbours”. Frankfurt, which has much taller buildings than Dublin, regards anything above 20m in height as a “high-rise” building.

There is also persistent confusion in the public mind about height and density, with a false assumption that they are one and the same. Yet Ballymun was low-density housing even though it had seven towers that rose to 15 storeys in height.

That we should have higher housing density in Dublin, even in the suburbs, is unarguable. This could be done by raising the general height to five or six residential storeys, giving the city European-style densities of 160-200 housing units per hectare.

The proposed tower in Tara Street, unveiled in The Irish Times on Wednesday, would have zero residential content. An exclusively commercial scheme, it would provide a 110-bedroom hotel and 17 floors of offices, with a bar/restaurant on top.

The Tara Street tower would rise to a height of 88 metres, which is the maximum permitted by Dublin City Council’s George’s Quay Local Area Plan (LAP). It envisaged a high-rise cluster developing around the city’s busiest railway station.

Because the tower proposed by developer Johnny Ronan is right next door to the station and would incorporate a new entrance to it from Tara Street, planning permission is more than likely to be granted, whatever objectors may say.

Those who think it’s a “monstrosity” should bear in mind that the LAP was adopted by city councillors in July 2012. Thus, they can’t just blame the planners who drafted it, but also the elected representatives for approving a high-rise future.