Dáil to vote on appointment of Geraldine Feeney to Sipo 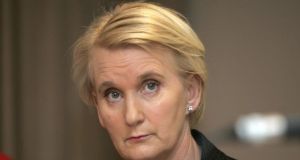 The Dáil is set to vote without a debate on Tuesday on the appointment of former lobbyist Geraldine Feeney as a member of the Standards in Public Office Commission (Sipo).

Ms Feeney, who is an ex-Fianna Fáil Senator, acted as a lobbyist for the National Association of General Practitioners (NAGP).

The president of the doctor’s group, Dr Maitiú Ó Tuathail, received a leaked document on a pay deal struck with a rival organisation from then-Taoiseach Leo Varadkar in April 2019.

Mr Varadkar’s actions are the subject a complaint to Sipo. The opposition has questioned Ms Feeney’s appointment when it emerged the Cabinet had approved the move last week. One of the two vacant roles being filled on Sipo must be filled by a former Oireachtas member - Ms Feeney served in the Seanad from 2002 to 2011.

Returns on the Lobbying.ie database, which is maintained by Sipo, show she lobbied on behalf of the NAGP on seven occasions in 2017, including on the new GP contract which would ultimately be leaked to its president two years later.

Last week, Sinn Féin’s finance spokesman Pearse Doherty said Sipo would be adjudicating on complaints about Mr Varadkar’s conduct in relation to the GP contract, asking whether it was appropriate that Ms Feeney would be appointed to the body. He also said there was a general question over whether someone who had worked as a lobbyist should be appointed to Sipo.

Speaking in the Dáil last week, Mr Varadkar said former politicians were appointed to Sipo “to have somebody who has a working understanding of the work we do as politicians”. He said the role was previously filled by Jim O’Keeffe, the former Fine Gael TD.

The Tánaiste said he was unaware Ms Feeney had previously lobbied for the NAGP.

A Government spokesperson said last week Ms Feeney’s appointment had been made based on her experience as a public representative and her reputation for fairness and integrity, as well as her knowledge of regulatory affairs.