Cyclists will not be compelled to wear safety equipment, says Ross 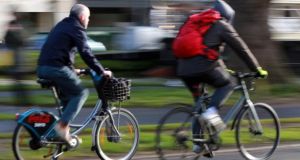 ‘I am not going to introduce measures, certainly not in the immediate future, to compel people to wear hi visibility jackets or helmets...’ Photograph: Nick Bradshaw/ File

Minister for Transport Shane Ross has ruled out making it mandatory for cyclists to wear safety equipment, such as helmets, lights and reflective clothing.

Mr Ross said while he would love to make the wearing of such equipment mandatory, some of those in the cycling lobby do no want it and viewed it as “nanny statism”.

He said making such equipment mandatory for cyclists would be difficult to enforce and also run the risk of criminalising children.

The Minister told The Irish Times: “I deplore the fact that some people refuse to wear cycling helmets. It is a great pity. It is irresponsible but it is their own choice.

“So I am not going to introduce measures, certainly not in the immediate future, to compel people to wear hi visibility jackets or helmets but I am going to try everything short of that to try and encourage them to do that.”

Dr Mike McKillen of the cyclist.ie advocacy group welcomed this approach and said it was sensible.

“It is good to hear that is the Minister’s approach. No other country has made it mandatory. You have cyclists in Holland and Denmark who are able to cycle safely through their cities without being forced to wear reflective clothing,” said Dr McKillen.

“The key thing for cyclists is the cycling infrastructure, not criminalising them over wearing helmets.”

Mr Ross also admitted he was concerned at the levels of hostility between drivers and cyclists and said this needed to reduce.

He said the Department of Transport was investing in up to 200km of cycle lanes and said this would reduce friction between these two groups of road users.

“That should give them the kind of protection they need and reduce some of the hostility between cyclists and drivers,” he said.

He also called on motorists and cyclists to both respect the rules of the road especially at junctions and traffic lights.