Credit union official jailed for theft of over €400,000

Judge notes nobody, including Moira Coughlan, seemed to know where money went 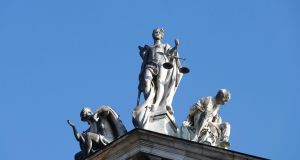 A senior official with a Cork credit union has been jailed for two years after she pleaded guilty to stealing over €400,000 from the credit union over a seven year period.

Moira Coughlan (55) of the Stables, Mineville, Knocknahorgan, Sallybrook, Glanmire, Co Cork had admitted a total of 592 offences. They related to the theft of €407,441.94 from some 29 accounts at the Synergy Credit Union in Fermoy.

Coughlan pleaded guilty to 251 counts of theft , 300 counts of unlawful use of a computer and 41 counts of false accounting between 2009 and September 2016.

Det Sgt James O’Shea told a previous sitting of Cork Circuit Criminal Court that Coughlan was the insurance officer at the Synergy Credit Union headquartered in Fermoy. He said in that role she had control over the accounts of some 25 deceased members while she also had control over four family accounts.

He said between 2009 and September 2016, Coughlan moved €1.5 million in unlawful transactions on the family accounts and the accounts of deceased members when they were still in probate and before money was paid out from them in order to cover up the thefts.

The Financial Officer at Synergy, Marvin Board, noticed some unusual activity where money was being withdrawn from one deceased member’s account and when he investigated it, he traced the activity back to Coughlan and Synergy then contacted auditors, Grant Thornton and notified gardai.

Det Sgt O’Shea said that gardai arrested Coughlan for questioning about the thefts and fraud on September 19th 2017. He said she made immediate admissions and co-operated fully with gardai before pleading guilty to the offences at the first available opportunity in May last year.

He said Synergy’s insurance policy meant the credit union was able to reimburse all 29 account holders the money that Coughlan had stolen from their accounts but the credit union was still at a loss of some €207,000 due to the cost of the auditor’s investigation into Coughlan’s fraud activity.

Defence barrister, Patrick O’Riordan BL told the court that Coughlan’s marriage had broken down and she was now separated as a result of her criminal behaviour. A psychiatric report showed that she had suicidal thoughts and had received psychiatric treatment.

He said that that there was an element of robbing Peter to pay Paul to her offending and she had explained she was spending the money to get positive attention from others and there were several who were willing to benefit from her largesse and the money was now dissipated.

Mr O’Riordan said Coughlan was set to receive in excess of €200,000 for the sale of her house which will be furnished as compensation in the case but this will in effect leave her “destitute” as he pleaded with Judge Sean O Donnabhain for leniency.

Judge O’Donnabhain said Coughlan had “plundered” accounts including those of individuals who had died leaving their estates in probate but he noted that nobody, including Coughlan herself, seemed to know where the monies went and there was “no bundle of money” awaiting her.

He noted that he had come across a number of such cases which were “largely similar” which involved a person before the courts for the first time. The individuals had a good work record and had never come to garda attention and he had to take account of mitigating factors in the case.

These include the furnishing of substantial compensation and the guilty plea which avoided the need for a “laborious and long” trial while he also had to take account of the level of co operation Coughlan gave in the case which expedited the garda investigation.

However imposing sentence, Judge O Donnabhain said the case lacked any exceptional factors which would have allowed him to impose a suspended sentence and he sentenced Coughlan to two years in jail which he backdated to November when she first went into custody.