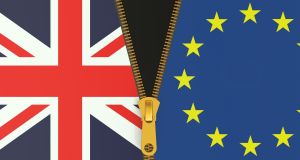 The survey of 1,611 Sky customers in the Republic of Ireland also reveals that nearly two-thirds of people support the concept of a united Ireland. Photograph: Getty Images

An overwhelming majority of Irish people believe the Government should hold out for a legal guarantee ensuring there will be no hard border even if that risks a no-deal Brexit.

A poll carried out by Sky News in the Republic reveals solid support for the Government’s stance on Brexit.

It shows that the Brexit process has made Irish people view both the UK and unionists in a much less favourable light.

The survey of 1,611 Sky customers in the Republic of Ireland, weighted to take account of the profile of the population, also reveals that nearly two-thirds of people support the concept of a united Ireland.

Some 79 per cent of those surveyed agreed to the statement that “the Irish Government should hold out for a legal guarantee that there will be no hard border between Northern Ireland and the Republic of Ireland even if that risk a no-deal Brexit on March 29th”.

Support for that proposition was almost uniform among supporters of Fine Gael, Fianna Fáil and Sinn Féin.

The Government’s handling of the Brexit negotiations has been favourably approved by 60 per cent of the population with just 17 per cent disapproving. Only 4 per cent believe the Irish Government has pushed too far with half (49 per cent) saying it has got the balance of the negotiations just right.

The EU’s stance has won favour with 63 per cent of the Irish population with just 16 per cent disapproving.

Unsurprisingly, just 6 per cent of the Irish population approved of the way the UK government is handling Brexit and nearly two-thirds believe its approach to the Brexit negotiations has been “very bad”.

The reputation of the UK has taken a battering in Ireland as a result of Brexit.

Nearly half (48 per cent) regard Unionists much less favourably as a consequence of Brexit.

Given a choice between cutting ties economically with the UK or with the EU, 81 per cent of Irish people would rather cut economic ties with the UK than the EU.

Irish people were also asked would they support or oppose Irish unity.

Nearly two-thirds of those surveyed said they would strongly support (34 per cent) or tend to support (39 per cent) a united Ireland with only 16 per cent tending to oppose or strongly oppose the proposition.

Approval for a united Ireland was strongest among Sinn Féin supporters with 61 per cent strongly supporting the idea.

However, just over half of all Fine Gael supporters (53 per cent) support a united Ireland, 21 per cent are neutral about it and 23 per cent tend to oppose or strongly oppose the idea.