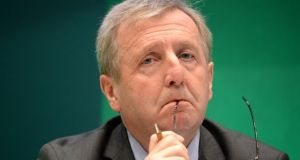 Minister for Agriculture, Food and Marine Michael Creed said he had “no imprimatur by virtue of the programme for government or a mandate from the people” to ban the industry. Photograph: Dara Mac Donaill

Minister for Agriculture Michael Creed has rejected calls to ban fur farming in Ireland despite a recommendation by the organisation representing veterinary surgeons that the sector should be closed down immediately.

Pressure is growing to eliminate fur farming internationally and 14 of the EU’s current 28 member states have banned the farming of mink and other similar wild animals.

But Mr Creed has said he cannot close down a “legitimate, highly regulated and inspected industry”, which he estimates employs more than 100 people in the State.

The Minister said he had “no imprimatur by virtue of the programme for government or a mandate from the people” to ban the industry.

Veterinary Ireland, the organisation representing veterinary surgeons, said its animal welfare committee had originally considered a number of recommendations to improve the health and welfare of farmed mink.

But it concluded that the welfare programme implemented by fur farmers “cannot prevent the welfare problems regularly encountered on fur farms, such as stereotypies (repetitive movement) and serious injuries.

The organisation’s national council in November last year ratified its recommendation that a complete ban be implemented immediately.

Three farms are in operation in Ireland with over 200,000 mink. The animals are held in conditions counter to their natural solitary habitat.

Veterinary Ireland’s policy document on the issue pointed out that in nature mink are solitary, have territories ranging from one to three square kilometres and are semi-aquatic.

But in captivity they are in close proximity to other mink and “cannot avoid abnormal social behaviour”. They “spend their entire lives in wire mesh battery cages, typically measuring 90x30x45cm”. They “cannot run, swim, dive or hunt thus preventing them from exhibiting basic natural behaviours”.

The document also noted that “deprivation of swimming water results in similar stress to deprivation of food” and in captivity they “regularly suffer serious injuries”.

Mr Creed said he was aware of Veterinary Ireland’s report, but he pointed out that fur farmers were subject to the same animal welfare legislation as other livestock farmers.

And he said his department had drafted new codes of practice which require each farm to “have its husbandry plans signed off on by its private veterinary practitioner”.

When the issue was raised in Dáil this week Solidarity TD Paul Murphy said Veterinary Ireland had joined a “chorus of opposition” to such fur farming which included a weekly demonstration outside the Department of Agriculture.

The Dublin South-West TD said “it is not possible to farm mink in a way that is not incredibly cruel”. He suggested that “offering opportunities to those affected” could be a way to counterbalance the closure of the farms.

The Minister said the employment fur farming generated was rarely commented on and he noted that other EU member states which did not operate such farms had banned them.

In some countries where the farms were closed down those member states “have paid substantial compensation to close down fur farms”.

But despite the actions of other EU states “there are no plans to introduce a ban on fur farming in Ireland”.