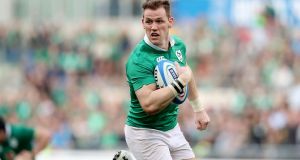 Ireland and Ulster rugby player Craig Gilroy has apologised for the language he used in a WhatsApp message which appeared as evidence during the rape trial of his teammates Paddy Jackson and Stuart Olding.

Ulster Rugby and the Irish Rugby Football Union (IRFU) have said the winger is now the subject of an internal review and will not be available for selection this weekend, when Ulster play at Edinburgh in the PRO14.

During the trial over the alleged rape of a then 19-year-old student in Belfast in June 2016, it emerged that a person, referred to only as ‘CG’ in court, had sent a WhatsApp message to Olding which used an offensive term about women.

To a text from ‘CG’ reading: “Any sluts get fucked?” Olding’s reply was: “precious secrets”.

During the case, he said his response was a term from The Lord of the Rings. “It doesn’t mean anything,” Olding said. “Just a nonsense comment.” Olding described CG as “a close personal friend” who he would be in regular contact with.

Jackson and Olding were last week found not guilty by a jury. Over the course of the trial there was a focus on WhatsApp exchanges that followed the alleged rape.

In a statement posted on Twitter late on Tuesday, Gilroy said: “I would like to apologise unreservedly for any offence caused by the Whatsapp message I sent in June 2016.

“I would just like to clarify it was sent privately, not part of any group chat. Regardless my comment was totally inappropriate and is not an accurate reflection of my beliefs (nor) Ulster rugby’s values.

“I take full responsibility for my actions and in future will ensure the language I use in private or public better reflects who I am and what I stand for. I am deeply sorry for the hurt my comment has caused. Craig.”

Gilroy is from Bangor in Co Down and attended Methodist College - the same south Belfast school as Jackson. He has 10 caps for Ireland and has made 141 appearances for Ulster. Gilroy was in the court’s public gallery on the second day of the rape trial along side Ulster and Ireland captain Rory Best.

Jackson and Olding have both signalled their desire to return to playing rugby as soon as possible. However, both are waiting to find out what recommendations a panel of senior representatives from the IRFU and Ulster Rugby will make regarding their future following the conclusion of the trial.

They have been “relieved of all duties” since the legal process began in 2016.

Two other men who were also on trial were also found not guilty in connection with the incident. Rory Harrision was cleared of covering up the alleged rape by misleading police and withholding information during the investigation. Blane McIlroy was found not guilty of one count of exposure.