Bundee Aki enjoying being back to rough and tumble of Connacht 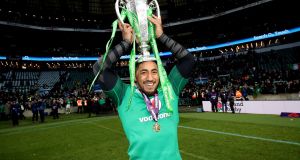 Brushing off some “cobwebs” after recent Grand Slam celebrations, Bundee Aki bounced back into Connacht training this week ahead of Saturday’s Challenge Cup shoot-out with Gloucester.

“It’s always good to be back around Connacht,” he says. “Good to run around the dirty pitch behind us – the puddle pitch – I’m not used to that.”

It is a nod to the eight weeks he has spent with the Ireland squad, but despite his return to the Sportsground as a Grand Slam winner, his feet are still firmly planted.

“At the moment it feels like I am the new player in the squad, so I want to make sure I do my homework and fit into the team this week.”

Aki concedes the Six Nations was a “huge” step-up from Pro14 fare.

“I didn’t realise how intense the competition was until I was in the squad and in the competition itself. If you want to win the Grand Slam, you have to make sure you win every week, and being in that squad and environment has been good. I feel comfortable being here, but I always want to improve. Something I look forward to doing is improving my game.

“Winning silverware is a great achievement for how hard you have worked and where you have come from, but when you are back with a different group, you have to park that and focus. You can’t really dwell on how good you played, but do the right thing and help out the team.

“It is going to be a challenge for us and I am sure we can step up to the plate and do the job. Certainly I have seen the boys playing really well and I have seen the ambition, but sometimes the result hasn’t gone their way or told how well they played. Last week was a fine example. Watching from the sidelines was hard to take, but I think things are going in the right direction and there is no better than this big challenge ahead of us.”

Expected to partner Tom Farrell midfield, his return is timely with Eoin Griffin having suffered a hamstring injury in last weekend’s defeat to Edinburgh.

Connacht have never come out on the right side in meetings with Gloucester in European competition, but Aki’s presence, along with fellow internationals Kieran Marmion, Quinn Roux and Ultan Dillane (likely on the bench), will bring an added dimension and the “experience factor” which coach Kieran Keane believes will be “blessing”.

“I am very proud of Aki,” says Keane, while also confessing being “quite emotional about this bugger”.

“I felt he did a wonderful job. Now he’s probably going to go away from us, we are not going to get him, but we are really happy for him. I always believed [he’d do well]. Even if he had stayed in NZ, he would have done well.

“He brings a threatening presence which is really good for us, and his hard edge will lift the boys.”