Covid-19: World in ‘for a hell of a ride’ in coming months, Dr Mike Ryan says 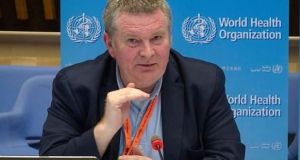 An estimated 750 million, or 10 per cent of the world’s population, have been infected by Covid-19, World Health Organisation (WHO) official Dr Mike Ryan has said.

The Irish-born executive director of the WHO’s health emergencies programme said he was worried for the fate of the 90 per cent of people who have not had the disease.

He estimated 10 per cent as “our best guess” in relation to the global rate of infection to date and those who have antibodies for the virus.

“The problem is there is more than six billion left. Therein lies our problem,” he told webinar hosted by the Royal Irish Academy (RIA) entitled Learning from Pandemics: a Century of Experience.

Dr Ryan predicted the world is in “for a hell of a ride for the next eight or nine months” as it awaits a vaccine, but he cautioned that a vaccine will “not be a silver bullet, but an additional tool that should be added to a comprehensive strategy to fight this disease”.

He stressed though that the response to Covid-19 around the world had been “unprecedented”.

However, he criticised the lack of a global response to plans to raise some €25.6 billion (US$32 billion) for the Covid-19 accelerator programme to produce diagnostic tools and vaccines when they are available to deal with the virus. Just €3.24 billion has been raised to date.

“For $32 billion we can develop a vaccine equitably for everyone in the world. Compare that to the trillions of dollars poured into economic mitigation. We are 10 per cent funded for a Marshall Plan like you wouldn’t believe. Yet the cavalry isn’t coming in terms of funding. Governance and global leadership has been a major issue in this response.”

“Some of the best political leadership I have seen in the last nine months have come from women. We need to think and reflect on that and what is that leadership style that brings society together during a crisis.”

Africa was perceived to be doing better as a result of the pandemic both because it had a much younger age profile, but also because African countries are used to epidemics and know how to manage them by dealing with them at a community level first instead of looking for medical solutions. Even during recent Ebola epidemics life continued on as normal in west Africa, he explained.

“I wonder what would happen if there were 2,500 cases of Ebola in New York?” he asked.

“If you look at any metric of resilience, the industrial world has not demonstrated a lot of that over the last couple of months whereas African countries because of dint of the crisis they face day-to-day, they just get on with it. I know that sounds simplistic, but that is why they have been perceived to have done better.”

Dr Ryan said a lot of lessons that could have been learned from the Sars (severe acute respiratory syndrome) outbreak 10 years ago, but they were not.

“It should have scared us a hell of a lot more into putting in place the systems that address those issues all the way along from the animal kingdom right to how we deal with epidemics as they occur,” he said.

Dr Ryan said he was “somewhat cynical or at least depressed at the prospect of whether the world will wake up and we will actually see that epidemics are yet another consequence of our poor planetary and ecosystem management.

“In the end we will be putting out these fires again and again.”

He pointed out that health reports on the threat of emerging diseases from 1993 which were ignored by countries.

“We have put almost no defence up against the Earth-killing things that are there such as climate change and infectious diseases.”