Reopened pubs: ‘Every night is like St Stephen’s night, but the till doesn’t reflect that’ 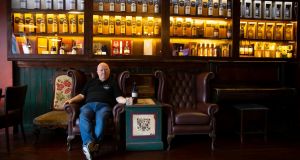 Jim Gordon, owner of the Revolution Bar in Waterford city. ‘People are tending to go bar to bar to bar, booking a table for an hour and a half in each place,’ he says. ‘We’ve had to be really strict.’ Photograph: Patrick Browne

Running a pub since the Covid-19 restrictions lifted two weeks ago is “is like being a schoolteacher”, says Jim Gordon, the owner of Revolution Bar in Waterford city.

“Staff basically have to say, ‘Sit down, or we will not serve you any more drink’. We’re getting a bit of flak about them being rude, but our staff have to maintain order.”

The table reservation system lends itself to pub crawls, he has found. “People are tending to go bar to bar to bar, booking a table for an hour and a half in each place. We’ve had to be really strict: if you arrive with too much drink on board, we won’t allow you in, whether you have a reservation or not.”

On Monday, it will be two weeks since wet pubs outside Dublin were permitted to reopen. But not all have done so – of the country’s 6,200 or so rural pubs, between 1,000 and 1,200 are still closed, according to estimates by industry sources. A further 400 or so rural hotels and restaurants with a bar licence are also shut.

For the rest, the challenges of running a pub in the Covid era are becoming very apparent. Publicans report that their takings in the first two weeks back are down anywhere between 40 and 80 per cent on the same period last year. Several describe the stress on both staff and employers in trying to enforce the new social distancing regulations, even though customers are generally co-operative about wearing masks. There are fewer customers, but more hygiene measures and more steps involved in the preparation of each drink. And while they all say they are happy to have reopened, in the background is the constant fear of further, regional lockdowns.

“We spent so long shouting that we wanted to reopen, and now that we’re open, we’re worried is it actually viable to be reopened,” says Marie Mellett, who took over the running of the family pub, Mellett’s Emporium of Swinford, Co Mayo, from her father last week.

“Last Saturday and Sunday, we were so busy it felt like St Stephen’s night. But the till doesn’t reflect that – it’s like a normal Thursday.”

On Saturday night, the bar “looked empty” but it was full, with 85 people in, and five staff members – a ratio of one staff member to 17 customers, which is what is needed to keep up with requirements. “The level of cleaning is just obscene. You can’t just go and collect a few glasses like you used to. That’s one person’s job. Another job is making drinks. And someone else is delivering drinks and taking payment. If someone pays by cash, there’s a whole rigmarole with washing their hands. We’re going through an insane amount of paper towels,” she says.

Michael O’Donovan had barely reopened his family pub, the Castle Inn on Main Street in Cork city, before he was anticipating being locked down again, as Covid case numbers rose across the county. During the first two weeks since reopening, he is on track to just about break even. “Our bar was ‘full’ by 2.30pm last Saturday because all the tables were taken. And we had only 16 people in,” despite a capacity of around 32.

“Being a publican, looking at your bar and knowing that it’s three-quarters empty compared to normal times, and yet you’re having to say to regulars, ‘Sorry we’ve no room’ – that’s really hard to do.”

His pub has been in the family since the 1930s, so there is no rent or mortgage on it. “If we did, it wouldn’t be viable to stay open… Last week’s takings weren’t one-fifth of what our takings would have been at this time last year.” Like all the other publicans interviewed, he is reliant on the Government’s wage subsidy scheme.

His clientele is a mix of older customers, whom he has found to be generally very compliant, and students. “It’s been a different challenge dealing with students, because they want to interact with other students at our tables. We’ve had to go to them once or twice and say, ‘You have to remain seated.’”

Usually, there’s no issue, once they are reminded. “We’ve had Garda inspections twice a day since we reopened. We welcome the inspections. We have to run an honest house, for everyone’s sake.”

In Limerick city, Liam Flannery reopened his family pub, Flannery’s on Denmark Street, to customers over the summer as a food operation. Now, with non-food customers back, he’s getting used to another “new way of doing business. It’s 10 times harder for a lot less return. But we need to do it to keep ourselves alive,” he says.

Both he and Gordon are already anticipating a quiet Christmas, which has traditionally been a time for publicans to shore up ahead of a quiet January and February. “Christmas parties are a thing of the past. Thirthieths and 40ths are gone. Corporate entertainment is gone. An awful lot of our income streams are drying up,” says Flannery.

Gordon is hoping that, instead of a big night out, companies will offer their staff a voucher to go out in the city and support their local pub. He’s also planning to produce gift ranges, including a home cocktail kit and his own label whiskey.

But innovation can only help so much. To survive, “we’ll need every single subsidy and grant going,” says Flannery. He is hoping that supports for the pub industry will be announced in the upcoming budget. “We need certainty. If you don’t have certainty, there’s confusion. And confusion costs time and money.”

Brian Foley of the Vintners’ Federation of Ireland says that two weeks into reopening, the “stark reality of the challenges” facing publicans are becoming apparent. “We thought once they reopened, they would have a clear run at it, but in reality, it’s going to be a long autumn and winter. We don’t know the shape of Christmas yet. It’s impossible for publicans to know what’s ahead. And that’s causing a lot of worry.”

If the country moves to Level 3 restrictions – which say that pubs can open only for takeaway or up to 15 customers outside – “that effectively means closure. This isn’t the Mediterranean,” he says.

“It’s really clear from speaking with publicans and staff that they continue to experience huge emotional and financial pressure. That’s as true for the bars that have opened as for those who have had to remain shut,” says Liam Reid, corporate relations director for Diageo Ireland. As part of its €14 million fund to help publicans reopen, Diageo is setting up a helpline for publicans and their staff, offering emotional counselling and independent financial advice. The helpline is due to launch next month.

Tomás McKenna runs the Craftsman Pub near Waterford Institute of Technology. With a large premises, industrial estates nearby and a local residential population, trade has been consistent throughout the day since reopening, and he is as optimistic as he can be. Even so, the students have not returned to the city in significant numbers, and social distancing means capacity is down. On the night of a recent Liverpool match, it was at 40 per cent of what it would have been on match nights last year. “It’s very much a case of open, give it a go, and see how it goes,” he says.

Customers want to make it work as well, he says, and so they have generally been co-operative, but it’s hard having to remind them to put their mask on to go to the bathroom or the bookies next door. “They’re coming in to get away from all that. You don’t want to be the fun police, but you do have to remind them.”