'Don't take a risk': A further 470 Covid-19 cases and one more death reported by NPHET 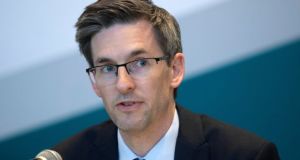 A further 470 Covid-19 cases and one more death have been reported by the National Public Health Emergency Team (NPHET) on Friday.

There have now been a total of 1,801 Covid-19 related deaths in Ireland.

The Health Protection Surveillance Centre (HPSC) has now been notified of a total of 37,063 confirmed cases of COVID-19 in Ireland.

Forty per cent are confirmed to be associated with outbreaks or are close contacts of a confirmed case, while 68 cases have been identified as community transmission.

The acting chief medical officer Dr Ronan Glynn said: “The situation nationally is a matter of serious concern and NPHET is now recommending that no more than 2 households should meet at any given time.

“It is vital that everyone - families, friends and neighbours - limit the opportunities this virus has to move from person to person and stop the spread of the disease across households.

“Behave as though you have the virus and keep yourself and those around you safe – don’t take a risk by organising or attending gatherings with more than one other household.”

Taoiseach Micheál Martin warned on Friday that a second wave of the coronavirus pandemic is underway across Europe, as he expressed sympathies to US president Donald Trump and his wife Melania after the couple tested positive.

“May I say as a preface to this, to wish President Trump and his wife Melania the very best in terms of wishing them a speedy recovery,” Mr Martin said on the sidelines of a summit of the 27 European Union leaders in Brussels.

“It’s difficult for them to have tested positive for Covid-19 and we wish them a speedy recovery. It reminds us all of the very present prevalence of this virus.”

The 27 EU leaders met to discuss the severe economic impact of the pandemic among other issues, in a summit that had been delayed by a week because its chair European Council President Charles Michel was forced to go into quarantine after exposure to the virus.

Mr Martin said the leaders had agreed to work on increased coordination in procuring and distributing vaccines currently under development, and on a system of classifying risk in different countries that would bring travel rules across the EU into line.

“Today in the European Council it’s very, very clear that a second wave is on the way across Europe,” Mr Martin warned, describing a “very similar pattern, younger people being infected first, then a higher incidence among the broader population”.

“There’s a lot of concern about the health and economic impact of Covid and also the duration this will continue,” he added.

“The story in Ireland is not unique, it’s quite similar to the pattern across Europe. It calls for increased coordination on a number of fronts.”

Almost 1,000 people in Northern Ireland have tested positive for coronavirus in the last 24 hours in what is the largest daily increase since the pandemic began.

The daily statistics bulletin released by the Northern Ireland Department of Health (DoH) on Friday afternoon showed 934 new cases of the virus have been identified in the last 24 hours.

The figure is more than double the previous highest number of daily cases, which was set only two days ago.

One more coronavirus-related death was reported, bringing the total recorded by the Department to 582.