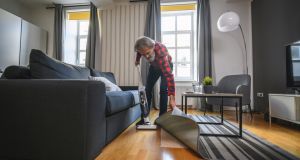 Males need to be taught from the earliest age possible to do their fair share of housework and caregiving, a men’s charity has claimed. Image: iStock.

Males need to be taught from the earliest age possible to do their fair share of housework and caregiving, a men’s charity has claimed.

Sean Cooke, chief executive of the Men’s Development Network, said sharing unpaid work in the home is an “urgent matter of gender justice”.

He maintained there will never be gender justice until men take responsibility for half of the world’s childcare and domestic work.

Work to develop positive attitudes towards fatherhood and managing households should begin at the earliest age for boys, Mr Cooke said.

“ Ireland, believe it or not, still needs a radical rethink when it comes to male stereotyping and the attitudes held towards fatherhood and caregiving. This will not only support women emotionally and practically, but also support the betterment of men’s mental health,” he added.

He also stressed that the role of men in the home needs to be discussed more both because of the changing nature of society and so that children can have positive male role models.

Mr Cooke was speaking at the online launch of the Men’s Development Network annual report. Founded in 1997, the network is a charity based in Waterford city. It runs a number of national programmes including one-to-one developmental parenting, training, phone line supports and awareness raising.

The network is a supporter of MenCare, an international campaign that is working towards two fundamental goals: men and boys doing 50 per cent of the caregiving work around the world and an end to domestic violence. It operates in 40 countries around the world.

The network believes fatherhood can prevent child abuse and violence against women. This can be achieved by breaking down male stereotypes about how men should behave in family settings.

Speaking at the event via videolink, the Minister of State for Mental Health and Older People Mary Butler said the goal of achieving “equitable and involved fatherhood cannot be underestimated”.

She said the Covid-19 pandemic has brought about mental health challenges for families and that call to mental health helplines were up by at least 300 per cent during the pandemic.

Ms Butler praised the network for “supporting family units across the country and challenge damaging stereotypes that often prevent people from availing of the support they need.”

She believed society can be “truly inspired” by the work of the network in tackling the issue of male domestic violence and its support for the white ribbon campaign which seeks to end violence by men against women.