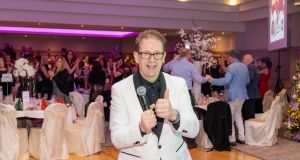 Martin Duffy, known in the industry as Scruffy Duffy, entertaining at a pre-pandemic wedding.

Five-piece wedding band Bluemoose have performed just one gig since Covid-19 hit. Pre-pandemic, the rock and pop tribute group would have three to four weddings a week and lead singer Tony Ward said they have already had 44 weddings planned for this year now cancelled.

“We are lucky that we are usually extremely busy . . . People don’t understand the size of the business we run,” he said.

Wedding entertainment is a “valuable” industry, he said, but if it doesn’t receive business supports it “will be gone”. Currently wedding performers are “falling through the cracks” of Government stimulus schemes, Ward said.

The entertainers are not eligible for Arts Council funding, but neither can they apply for business grants which require an attached “rateable premises”, he said.

“I have a van full of equipment worth over €150,000 that needs to be paid back, phone bills, public liability insurance. These are major costs.”

The pandemic unemployment payment (PUP) is a “great help”, but it is only covering his household and family expenses, Ward said.

Estimating its nearly 90 members have lost €11 million in earnings during the pandemic, the Irish Wedding Band Association is calling for a stimulus package and a rough roadmap for the return of weddings.

The association has written to Minister for the Arts Catherine Martin warning that its members’ businesses have been left in a “precarious and uncertain place” as they do not fit into the funding streams currently available.

The wedding industry has been dealt “another blow” this week, Cathal Molloy the association’s founder said, as indications came from Government that gatherings of more than 50 people were unlikely to be allowed before autumn. Molloy said it was not only bands and performers who were affected by restrictions on gatherings, but photographers, make-up artists and other freelance wedding professionals.

“People would have been going into this year with full diaries. Now they are down to 50 per cent and that will fall further,” he said.

Since the pandemic began last year, Sligo-based DJ and wedding celebrant Martin Duffy has done three small weddings and even incorporated “hand sanitiser games” into his routine. Going by the stage name Scruffy Duffy, the entertainer is well-known in the industry for providing the whole package: “I can marry you and I can entertain you,” he said.

The performer is adept at reinventing himself – from running wedding discos, to karaoke, to games and talent shows – but there is little he can do to adapt his gigs to fit strict lockdowns, he said.

“I looked at guys doing stuff online and I admire people who do, but that would drive me absolutely bananas . . . The one thing unique about me is it is a very live experience,” he said.

As an industry veteran he is keen to look on the bright side. The PUP has been a “massive help”, he said, adding that it takes the pressure off and allows him to focus on his family during the period.

“You could stress yourself to the gills but really this is just one of those times where you cannot do much . . . All of the work I am doing on myself now is going to benefit my work when I return. When it does return I will be ready to rock and roll,” he said.

Jesse Booth, frontman of the Suitcase Trio, said allowing “micro-weddings” to go ahead would be a lifeline for small wedding bands like his.

“I don’t think it is too much to ask to have 25 people in a room. Surely there is some way to get people there soon.”