University place cannot be offered to all but additional places will be found, Dáil hears 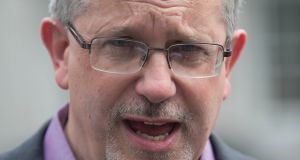 Taoiseach Micheál Martin has rejected a call for the Leaving Certificate exams to be cancelled and for a university place to be offered to every student who wants one.

He also rejected claims that the Government had been “dithering” over the status of the exams and said it was engaging with all the education partners to give students the clarity on the exams that they need.

In the Dáil, Solidarity TD Mick Barry said that more than 8,000 students between 16 and 18 have tested positive for Covid-19.

“On health and safety grounds, there is a case to say Leaving Cert students should be last to return to school,” he said.

As talks continued between the education partners on Leaving Cert exams, Mr Barry said it was only “die-hard supporters of the traditional exam” who want students back in schools to fit the timetable. “Week one, back in school, week two mocks,” he said. “Examinations should be cancelled and a place in university given to every student who wants it.”

Mr Martin said, however, that “there isn’t a place for everyone” in third level.

“It’s a wonderful catchphrase but it in reality that’s not possible, ” he said, but added that the Government would provide additional places.

The Government is committed to giving choice to students and some would like the opportunity to sit the exam, said Mr Martin.

“I don’t think we should use an emergency like this to throw out the traditional model,” which the unions are committed to, he said. “It is the Government’s view also that students require choice.”

The Taoiseach also rejected claims by Sinn Féin leader Mary Lou McDonald that the Government had been “dithering” over the status of the exams.

Ms McDonald said the delays in reaching a decision on the Leaving Certificate had caused real distress to students and their families. She also claimed the Taoiseach missed two deadlines on a decision “in the space of one week”.

The Sinn Féin leader also called for clarity on the Junior Cert exams and on whether schools would be returning on March 1st.

She said there had been “speculation and rumour” on March 1st being the date for schools to return and she believed it had been “thrown out there” without substantial planning or public health advice.

In response Mr Martin denied missing deadlines, adding: “I said this week that we want to bring clarity to students and that is the priority.”

He noted that Ms McDonald had called last month for consultations between all the partners in education. “You can’t have it both ways,”he said.

The Government has engaged in substantive discussions with all the partners, he insisted. “Covid-19 has upended all our lives, none more so than in education.”