Ferry company hopes to restart services to France in May 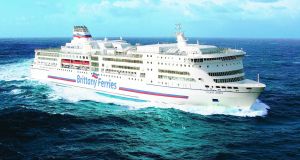 Brittany Ferries is to defer the resumption of its planned flagship passenger ferry service from Cork to Roscoff from the end of March until at least mid-May as a result of Covid-19 travel restrictions.

According to Brittany Ferries, the move follows the Government decision to impose stringent travel restrictions on passengers, allowing only essential travel.

The service will be kept under review and it is anticipated that services will recommence in mid-May.

The company, which began operating the Cork-Roscoff service in 1978, will continue its freight-only services from Cork to Roscoff, and Rosslare to Saint-Malo, as it meets the post-Brexit demand for direct links between Ireland and continental Europe.

Brittany Ferries CEO Christophe Mathieu said the company regretted the inconvenience the continued suspension of passenger services would cause its customers as it had hoped to resume all services by mid-March.

“The reality is that most people are simply unable to travel at this time. Booking levels are extremely low and we are relying on loans to carry us through this difficult period. It is therefore simply not viable to run loss-making routes at this time.”

Mr Mathieu said that the company would continue to monitor the health and travel situation in Ireland, the UK, France and Spain, with a view to recommencing passenger travel as quickly as possible, as it accounts for 80 per cent of the company’s annual income.

“As soon as our customers can travel again, we will be there for them. We are also pushing governments to set out a pragmatic, co-ordinated and clear roadmap to safely re-open travel as soon as the health situation permits,” he said.

Mr Mathieu said the company believed that the ramp-up of vaccines in both the European Union and the UK meant that this re-opening could be considered sooner rather than later but in the meanwhile it would continue to focus on its freight business.

Brittany Ferries’ normal service between Ireland and France operates between March and October for passenger traffic, but last year following Covid-19 outbreaks in Europe, it cancelled its service mid-March, resumed on June 29th and ran until October.

Earlier this month, Brittany Ferries announced that it was introducing three new weekly freight-only sailings between Ireland and France with the commencement of a new sailing between Rosslare and Saint Malo and two new sailings from Cork to Roscoff.

According to Brittany Ferries, these new sailings were in response to demands from both Irish and French hauliers seeking a more direct route between Ireland and France so as to avoid using the UK as a landbridge in the wake of Brexit.

“However, since new post-Brexit trade rules were introduced on January 1st, increasing numbers of Irish and continental hauliers have been deterred from using this ‘landbridge’, due to increased customs checks and paperwork,” said Brittany Ferries.

General manager of Brittany Ferries Ireland Hugh Bruton said: “It’s clear that Brexit has distorted flows of trade between France and Ireland. There’s now clear and compelling demand both in Brittany and beyond to boost freight capacity direct from the region to Ireland.

“And Irish traders too are seeking direct links to western France. We’re always listening to our haulier customers in order to best meet their needs and we look forward to restarting Brittany-Ireland services two months earlier than planned.”

The new Brittany-to-Ireland sailings come in addition to an extra weekly Rosslare to Cherbourg round trip, introduced in January, which means that Brittany Ferries now run eight freight sailings a week in each direction between Ireland and France.

Speaking earlier this month, chief commercial officer at the Port of Cork, Conor Mowlds welcomed the decision by Brittany Ferries to expand its freight-only service from Ringaskiddy to France.

“This announcement comes in the same month as we announced a second freight service from Cork to Zeebrugge. These direct freight services from Cork to the EU strengthen the region by offering more flexibility to Irish customers, ensuring supply chains are maintained,” he said.

Prior to the arrival of Covid-19, Brittany Ferries generated a turnover of approximately €444 million per year, carried between 2.5 million and 2.7 million passengers each year, travelling in approximately 900,000 cars, and carried 210,000 freight units.

Judge sanctions €7,500 settlement for child over lip injury 15:45
Settlement of €80,000 for girl injured after aunt had partial seizure while driving 15:36
Breakthrough by Cork scientists on colon cancer detection 15:25
Covid-19: Two more deaths and 138 further cases in North 15:11
Vast majority of people willing to get Covid vaccine next week if possible – survey 14:56