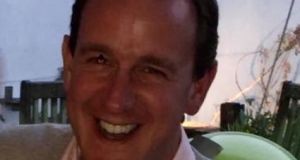 Richard O’Halloran, the Dublin businessman barred from leaving China over a dispute, has said the affair has been “devastating” for his children, and has appealed to Beijing to allow him return home.

Mr O’Halloran travelled to China in February 2019 but has been prevented from leaving the country after becoming embroiled in a dispute involving the Chinese owner of a Dublin-based aircraft leasing company he works for.

The father of four from Foxrock has not been accused of any wrongdoing and has assisted the Chinese in their prosecution of Min Jiedong, the owner of Dublin firm China International Aviation Leasing Service who has been jailed for defrauding Chinese investors in a fundraising scheme used to buy an aircraft now leased to a Finnish airline.

Mr O’Halloran joined the company after the scheme. His family fears for his physical and mental health given that he has been hospitalised on two occasions with serious medical issues.

In an interview with RTÉ’s Prime Time, Mr O’Halloran appealed to the Chinese authorities to let him go home after two years being held against his will.

“I’m a very hands-on father and literally within the blink of an eye that’s all gone,” he said.

“It’s very difficult for me to process but for the children its devastating. It’s very difficult to explain to a five-year-old, now seven, that daddy’s not coming home for your birthday, your communion, your confirmation or Christmas.

“There is no reason for me to be stuck here. I should be allowed to return home to continue running the Irish entity and returning money to China as I said I will do. I think it’s a lack of trust, a breakdown in communication somewhere.

“I think the judges presiding over the enforcement side of this particular case now are...struggling with the complexities as they perceive it for this transaction.”

He added: “My hope is that the Chinese authorities see sense and see that the commercial solution that we are putting forward is the most viable way forward. It’s the best solution for everybody.”

Minister for Foreign Affairs Simon Coveney has said the Government is in talks with Beijing to secure to the return of Mr O’Halloran.

The full interview with will be broadcast on Thursday at 9.35pm.