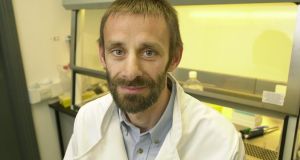 Kingston Mills, professor of experimental immunology at Trinity, said he ‘got no feedback from the document that was written’.

Members of a taskforce on Covid-19 testing have said that opportunities were lost earlier this year which would have “transformed the efficiency” of the State’s testing and tracing system.

Some members of the group, which was established following a request from an advisory group to the National Public Health Emergency Team (Nphet), also criticised the government response to a report it delivered in early April.

The report, released to The Irish Times under Freedom of Information, called for the establishment of an expert group to oversee strategy and overall co-ordination of the testing regime.

It also recommended the involvement of the private sector in the group, and a more widespread use of antibody testing.

The report flagged logistical concerns about polymerase chain reaction (PCR) testing, which is the bedrock of the State’s testing strategy, arguing that “current and increased scale of PCR testing is beyond the capacity of individual co-ordinators with more robust governance, management and co-ordination structures being required”.

It said that human resources and infrastructure in universities, industry and research centres are “not being maximally realised or exploited”.

Prof Paul Moynagh of NUI Maynooth, who convened the taskforce, said: “In my view, opportunities were lost early in the pandemic to implement essential structures with the right expertise that would have transformed the efficiency and workings of our national testing and tracing infrastructure.

“Scaling of testing was not achieved when significant capacity was required and the biggest tragedy was the slowness and lack of integration of testing and tracing meant that, to date, it has had very little, if any direct effect on limiting transmission of the virus,” he added.

He also said it was “disappointing that it doesn’t appear that meaningful consideration was given to the report or its recommendations”.

Fellow taskforce member Dr Tomás Ryan, associate professor in the School of Biochemistry and Immunology at Trinity College Dublin, said he was disappointed that “the core strategic and scientific recommendations of the proposal were ignored”.

He said the current testing system “is untested and unprepared for the purpose of preventing a second surge”.

Kingston Mills, professor of experimental immunology at Trinity, said he “got no feedback from the document that was written”. He said this was “disappointing” as the taskforce had significant experience in immunology that Nphet did not have.

Taskforce member Prof William Gallagher, director of the UCD Conway Institute, said he “would not be as concerned as some of my other colleagues”. He said the Health Service Executive had established a separate group on testing logistics and that “ultimately there were certain things that weren’t ideally done, but from my perspective they’ve done a pretty good job”.

A spokeswoman for the Department of Health disputed the idea that suggestions from the taskforce had been ignored, saying Nphet had considered and approved a proposal that a Covid-19 testing strategy group be established in early April, and the group was set up on April 21st.

She said Nphet welcomed views on testing, but relied on advice from the World Health Organisation and European Centre for Disease Prevention and Control, and its own membership.

She said a strategic framework for testing had been drawn up by a subgroup of the emergency team, and was endorsed on May 22nd. She said antibody testing is currently being deployed in a study to estimate the prevalence of immunity in the general population.