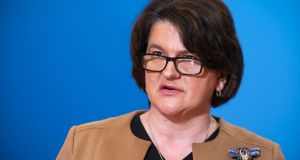 The deaths of 14 people with Covid-19 were recorded in Northern Ireland over the weekend.

The North’s Department of Health reported eight fatalities on Sunday and six on Saturday, bringing the total number of deaths from the virus to 653.

A further 896 cases were identified in the 24 hours to Sunday, and 923 on Saturday. The total number of positive cases in Northern Ireland now stands at 34,105, including 6,898 in the last seven days.

Additional restrictions, including the closure of the hospitality industry and an extended two-week half-term holiday for schools, have been in place in Northern Ireland for the last week in an effort to cut the spiralling number of cases.

In the Derry City and Strabane District Council area, where measures were introduced earlier to combat infection rates which were among the worst in Ireland and the UK, the rate of infection has been falling.

However the number of cases remains high across Northern Ireland, at 366 cases per 100,000 over the last seven days.

In the North’s hospitals, 317 people with coronavirus are receiving treatment, with 37 in intensive care.

The Department of Health in the North said on Sunday there was “no immediate or anticipated need” for coronavirus patients from Northern Ireland to receive intensive care treatment in the Republic.

However a spokesman for the department said that “should either jurisdiction require support, this will be provided where possible”, noting there was “longstanding co-operation between respective authorities and health services in Northern Ireland and in the Republic of Ireland”.

There were 15 intensive care beds available in the North’s hospitals on Sunday. However this does not include the additional capacity, understood to be about 150 extra ICU beds, which can be made available at the temporary critical care Nightingale hospitals.

Approval was given on Saturday for the “urgent” development of a financial scheme to help the taxi, private bus and coach sectors in Northern Ireland.

The North’s First Minister, Arlene Foster, said they had faced a “significant reduction in demand” for their services due to Covid 19, and it was “absolutely right that they should be able to avail of financial assistance to sustain them through this difficult time”.

Meanwhile the Sinn Féin MLA, Martina Anderson, has called on Royal Mail to look at a “contingency plan to allow the safe continuation of postal services” in Derry, including a temporary location for sorting parcels, following reports a number of staff in the sorting office in Great James’s Street had either been diagnosed with coronavirus or were self-isolating.

Royal Mail did not respond to an inquiry from The Irish Times last week, but Ms Anderson said over half of staff at the sorting office were now off work and “concerns still remain over the safety of staff and the disruption to services”, which she said had caused a backlog in deliveries and resulted in people “missing out on hospital letters and other important documentation”.

In Belfast, a group of barbers has threatened to take legal action against the North’s Executive over the closure of close-contact services until November 13th as part of the measures to restrict the spread of coronavirus.

Solicitors representing the barbers have asked to see the evidence used by ministers in making their decision. Additional reporting – PA