ViraPro in Ireland contained methanol, a chemical which with prolonged use can cause nausea, dermatitis and headaches 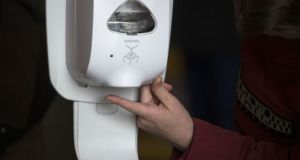 The HSE had spent €7.5m on ViraPro products, and has purchased 3.8m units. Photograph: Dave Meehan

What is the controversy over hand sanitiser about?

Hand sanitisers to be effective are supposed to contain a minimum of 60 per cent alcohol, usually ethanol. Inadequate levels of ethanol would render the product ineffective.

Samples of a hand sanitiser product called ViraPro licensed in Ireland with a stated 70 per cent ethanol content were found to contain some methanol, a chemical which with prolonged use can cause nausea, dermatitis, eye irritation, upper respiratory tract irritation and headaches.

Eyebrows were raised and concerns voiced when the Department of Agriculture chose very late on Thursday night to issue a statement about the possible risks posed by ViraPro, and advising the public not to use it.

It also issued formal notification to the Departments of Education, Health and Children that night on the eve of the school Halloween break.

When were the authorities first alerted to the problem?

Almost a month before the public warning. The first signals that something was wrong came from the European anti-fraud agency OLAF, which alerted Revenue.

ViraPro is produced in Turkey, and the anti-fraud agency found that samples of the product imported to Denmark when tested were found to contain excessive levels of methanol.

The same supplier used in Denmark provided the product to Ireland, and OLAF notified Revenue, who told the Department of Agriculture on September 25th.

Why was the Department of Agriculture the main department dealing with this?

It is the licensing authority for the approval and registration of biocide products, including sanitisers, and it licensed ViraPro on April 21st based on written documentation that it contained 70 per cent alcohol.

What happened after Revenue notified the department?

Consignments of ViraPro sanitiser were impounded and testing of samples began, with concerns about varying levels of ethanol and the detection of methanol.

Testing takes a while and samples at different storage locations were taken between September 30th and October 2nd for testing at the department. Indicative results on October 8th showed the product should not be on the market

Final results on October 16th clearly demonstrated the product was not alcohol-based.

So why wasn’t everyone alerted on October 16th?

Minister for Agriculture Charlie McConalogue admitted that his department should have made it public on that date. He said primary responsibility for the withdrawal of products rests with the company concerned, and it was immediately instructed to recall all product under the ViraPro name.

When it did not do so the department issued its public warning on October 22nd.

When did they tell other departments?

On October 20th Mr McConalogue’s officials had “informal” contact with the Department of Education procurement service. They following day they contacted the HSE with the test results. The day after that the public warning was issued.

Has anyone been affected healthwise by ViraPro products?

Medical sources said the use of ViraPro would have had to be over a much longer period to have had serious consequences, and that all symptoms should disappear completely within days of stopping use of the product.

Is supply an issue and how much has it all cost?

The HSE said it had spent €7.5 million on ViraPro products, and had purchased 3.8 million units. Over one million had been used and nearly two million were in storage.

The Department of Education does not yet have a cost for ViraPro as schools sourced their own sanitiser but it had received 146 requests for replacement product and this had been supplied.

The Minister for Agriculture is conducting a review, and the department will learn lessons from it. There may also be subsequent proceedings against the manufacturer as Revenue liaise with the European anti-fraud agency on the matter.