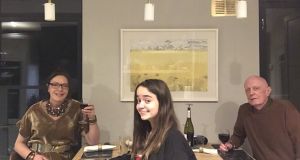 Paddy Murray (right): ‘For the first six months of this strange year of mine, it was me and only me who had to be careful.’

It’s been a full year – 12 months of living a life of restrictions. Yes, I know Covid-19 didn’t arrive on our shores until March. But it is a year since I was discharged from hospital after my last serious lung infection.

Even then, beds were in short supply and I was discharged so that I could do intravenous antibiotics at home and so that “my” bed became available to someone else.

The decision to send me home was also influenced by the presence in my ward of other patients with respiratory conditions who coughed a lot and because there was no single room available – I am generally put into isolation due to my compromised immune system – I had to go.

It was my 18th hospital stay in 10 years or so. Infections tend to come in spring and autumn. When I got out I knew I had a few months ahead which would require me to be extra careful.

That is when I really began my abstention from Guinness and from visiting Terenure Sport Club where I meet friends and others. My restrictions also meant my being unable to go and see Mick Pyro in Whelan’s, The Divine Comedy in The Bord Gáis Energy Theatre, Two Door Cinema Club in the Olympia, Villagers in Vicar Street and Scouting for Girls in the Academy, gigs for which I had invested in tickets. You may have picked up that going to see live music is – or was – a major part of my life. It hasn’t been for a year now.

But, I more or less got over my infection though it took a while. I was fine by February, that is to say as fine as you can be with chronic obstructive pulmonary disease.

And then March came along bearing unwanted gifts.

Right now, I have another infection which I think and hope is relatively minor.

It’s part of the way I have to live. For the first six months of this strange year of mine, it was me and only me who had to be careful. Oh, yes family and friends were aware of my difficulty and didn’t do anything stupid. But it was down to me to make sure I didn’t come into contact with anyone suffering from anything infectious.

But there was no mask wearing, no social distancing or anything of that sort. Okay, there wasn’t any hugging with my friends either but then, there never was!

I got through that first few months feeling pretty confident that, once the doctors, and I, were sure I was infection free, I’d be able to head off to Whelan’s and watch a gig and swill a couple of pints like I used to.

Damned Covid-19, it put an end to that hope.

But – and it’s a big but if you’ll excuse the expression – it didn’t just put an end to my hopes of getting back to my normal life which I accept isn’t everybody’s normal.

What it did was put an end to almost a million lives around the world. It put an end to close on 2,000 lives in Ireland. It threw tens of thousands out of work. It shut businesses that had survived the big recession and it killed businesses which had been around for generations.

And yet there are deniers.

Well, those deniers are the ones who are going to make this go on and on.

And if they continue to urge people not to take precautions, they’re causing real danger for us all and, indeed, themselves.

There is also the danger that I will miss the next gig for which I have tickets: the brilliant young English singer-songwriter Declan McKenna in the Olympia next April. Live music is part of me. I long for it. And it’s also something to aim for, to look forward to and to focus on so that I don’t let my guard down.

If we’re still restricted then and there are no gigs, it will be 20 months of partial or complete lockdown for me. It will be not far short of two years of not seeing some members of my family, one brother lives in Connecticut and another, who is older than I, lives down the country. Meeting up isn’t recommended.

I can Zoom so much before it becomes as unreal as the whole world has become.

So while I am just one citizen, can I, on behalf of the vulnerable and the old, please ask even the deniers to do what’s necessary.

Even if you think it’s a hoax, do what you’re asked because it will give us some hope.

Because right now, we’re a bit short of it.

And you guys are depriving us of the little bit we have.