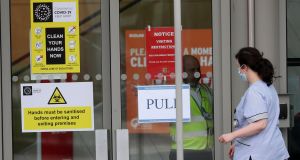 “Immediate” action is needed to mitigate the risk of infection spreading in several hospitals around the country in the context of Covid-19, the State’s health watchdog has said.

The finding is contained in a report on infection-control preparedness in the public hospital system, delivered last month by the Health Information and Quality Authority (Hiqa) to the National Public Health Emergency Team (NPHET).

The report states: “In the context of a pandemic situation, these findings in these groups in particular are of concern and require action in the short term to bridge these gaps.”

Separately, it has emerged that the Health Service Executive turned down a “priority” request from the chief inspector of nursing homes last month for all nursing homes and congregated disability centres to be supplied with three days’ worth of personal protective equipment (PPE).

Mary Dunnion, chief inspector at Hiqa, wrote to HSE chief executive Paul Reid on April 8th with concerns around inconsistent supplies of PPE to the facilities as they battled mounting Covid-19 outbreaks. She asked the PPE be supplied to the facilities centres “as a priority”. She copied her correspondence to five other high-ranking officials at the HSE, the Department of Health and Hiqa.

The HSE replied six days later saying it could not provide the three-day supplies due to challenges in sourcing PPE and that it was directing supplies to the highest-risk areas, but that it would keep Ms Dunnion’s request under review as supplies increased.

The deaths of another 11 patients with Covid-19 were reported by NPHET on Wednesday. There have now been a total of 1,571 Covid-19-related deaths in the Republic.

A total of 64 new laboratory-confirmed cases of the disease were reported, bringing the total number of cases to 24,315. This is the fifth day in a row in which the daily case number has remained below 100.

However, the fall in newly-confirmed cases comes amid fresh concerns over the impact of the crisis on screening programmes. While the HSE is working on a plan to resume screening across BreastCheck, CervicalCheck and BowelScreen, senior government sources cautioned it would be “quite some time” before routine screening programmes return.

A document given to Opposition parties warns that the National Cancer Control Programme has reported decreased referrals to all rapid-access cancer and symptomatic disease clinics.

“This has led to an unmet need which may lead to delayed presentations, delayed access to diagnosis and treatment, poorer outcomes and increased mortality.”

A spokesman for the HSE said the screening programmes were “preparing comprehensive plans for restarting their services in a safe and planned way”.