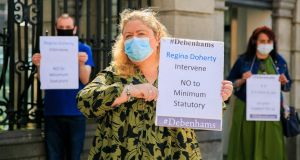 More than 30 workers gathered on Kildare Street, while maintaining social distance, with signs stating “workers must be prioritised” and “prevent Clerys mark 2”.

They called on the Minister to intervene and engage with KPMG, the liquidators appointed and the UK parent company to extend consultation. Ms Doherty is due to answer questions on the issue in the Dáil later today.

The workers were notified by email last month that the company’s 11 Irish stores were closing. They are calling on Debenhams to honour a previous agreement to pay two weeks’ redundancy per year of service, in addition to statutory redundancy.

Debenhams Retail Ireland Ltd announced on April 16th that it had applied to the court for the appointment of a provisional liquidator and that its 957 employees would be laid off.

Staff are planning to prevent stock being removed from stores and warehouses after workers from the union Mandate voted to strike.

Mairéad Fullam, a personal shopper at Debenhams Henry Street store for 24 years, said: “The Minister has to engage with them otherwise it’s the Irish taxpayer who’s going to pick up the bill for these 1,500 people that were employed.

“People are really angry with the treatment we have gotten. We are going to keep up this protest and we’re going to block all the shops with the stock in them, to stop them removing that stock and bringing it to the UK.

“Those blockades could be any time from Friday, we’re just waiting on the word to go and we will block them. We’re just not taking no for an answer.”

Suzanne Sherry worked at the same store in administration for more than 20 years.

“We’re looking for Minister Doherty to intervene and stop the liquidation going ahead and to investigate the case,” she said.

“We’re all really upset and devastated after working there for so long. We just feel hurt. The biggest thing for me is I now feel like we didn’t know who we were working for in the last few years.”

‘Can these jobs be saved?’

Solidarity TD Ruth Coppinger said “this liquidation should never have been allowed happen in the first place”.

The Dublin West TD added that “to permit a company to enter a liquidation process during an international pandemic is outrageous. Why has the Minister or nobody from this Government lifted up the phone to either the liquidator or Debenhams to explore whether these jobs can be saved?

“Why has the State shown no interest in investing in the order of €20 million to save these jobs, when the alternative is a €20 million-plus bill for putting these workers on the dole? Not one single measure has been implemented to stop a jobs massacre throughout the retail sector.”

“The entire country was scandalised at the treatment of the Clerys workers in 2015,” he said. “The State swore that never again would citizens be discarded and treated the way in which the Clerys workers were. They were left on the side of the road on O’Connell Street on a Friday afternoon, dependent on the State to step in and pay their redundancies.”

“As sure as night follows day, businesses will use the cover of the pandemic to restructure their operations, putting jobs and suppliers at risk and moving assets out of the reach of those who are owed money,” he added.

“Never was the need for such protections more essential. The Minister for Employment Affairs needs once and for all to do the right thing, change the law and empower her own department to seize back the money the taxpayer will inevitably have to fork out to pay statutory redundancy entitlements of Debenham’s workers and possibly many thousands more workers who may end up being caught up in insolvencies in light of the Covid-19 emergency.”