Catholic Church teachings will have ‘no authority ’ at Elm Park, says canon lawyer 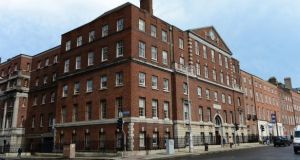 The consultants said they were ‘hugely excited’ at the relocation of the National Maternity Hospital at Holles Street to Elm Park. File photograph: Bryan O’Brien/The Irish Times

Seven leading medical consultants in Dublin have said were “entirely satisfied” their clinical independence at the new National Maternity Hospital on the grounds of St Vincent’s at Elm Park would “remain unfettered” there.

In a letter to The Irish Times, published on Thursday, the consultants said a decision by the Sisters of Charity to transfer ownership of their St Vincent’s Healthcare Group at Elm Park to a new independent charitable body, St Vincent’s Holding CLG, would enable construction of the National Maternity Hospital (NMH), currently at Holles Street, “without delay”.

They said they were “hugely excited” at the relocation of the NMH at Holles Street to Elm Park and were “entirely satisfied” their clinical independence would “remain unfettered” there.

The consultants recalled how under terms of the 2016 Mulvey Agreement the new NMH would “have full clinical, operational and financial independence in the provision of maternity, gynaecological and neonatal services (without religious, ethnic or other distinction)”.

This, they said, would be “copper fastened” by the Holles Street charter which entitles it to nominate four of the nine directors on the new NMH company board as well as its inaugural chair, and to also nominate a Master for the new hospital.

The Sisters of Charity will not be represented on the new company board.

Earlier this month the Sisters confirmed they had received Vatican approval to transfer ownership of properties, valued at over €200 million, as a gift to St Vincent’s Holdings CLG.

It is a requirement of Catholic Church canon law that Vatican approval be granted for transfer of such extensive properties owned by a religious congregation.This was granted by Rome in a letter dated March 16th last and seen by The Irish Times. It gave the Sisters permission “to transfer the entire issued share capital of St Vincent’s Healthcare group to St. Vincent’s Holdings for a nominal sum of € 1.00.”

It did so, it said, having studied relevant documents and having “heard the opinion” of Archbishop of Dublin Diarmuid Martin, Archbishop of Armagh Eamon Martin, and papal nuncio Archbishop Jude Okolo.

According to a canon lawyer, who did not wish to be named, the Vatican decision means “doctrines and teachings” of the Catholic Church will have “no authority or control” over either the new St Vincent’s Hospital Holding CLG or the new NMH and that there is now no vehicle “ by which such authority or control could be exercised”.

As to an expression of confidence by the Sisters that entities at Elm Park would continue to foster (founder) Mary Aikenhead’s “mission and core values”, the canon lawyer said this could not “realistically be interpreted as fettering or even attempting to fetter the clinical discretion of the NMH at Elm Park”.

It was a “legacy vision” statement “that one might expect after 200 years of service and at a watershed moment when the Sisters are withdrawing entirely from the healthcare edifice founded by Mary Aikenhead. ”