Over 70s can go for a drive within 5km of home, department confirms 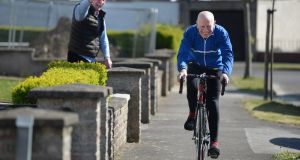 Sé O Hanlon, 78 from Glasnevin, Dublin going out on his bike following the easing of cocooning measures.Photograph: Dara Mac Dónaill / The Irish Times

Over 70s and cocooners who wish to leave their homes can go for a drive rather than a walk or a cycle if they prefer, once it is within 5 kilometres of their home, the Department of Health said on Tuesday.

The Department has clarified its guidance in relation to leaving the house for those who were asked to cocoon, which includes people over 70 and others in very high risk groups. It said cocooners can also drive, cycle or walk within 5kms of their home.

While those who had been advised to cocoon at home are now free to go outside to exercise, the Government has urged them to avoid contact with others and avoid visiting shops.

Until Tuesday, people over 70 were asked to stay at home in all circumstances, a recommendation which caused resentment from some of those in that age bracket. This was reflected in a statement from the Irish Senior Citizens’ Parliament last week. It said: “Blanket ‘cocooning’ based purely on age is difficult and some view it as ageist. They are law abiding, but are beginning to question the blanket ban.”

On Tuesday the allowed distance for exercise for the general population was increased from 2km to 5km of their homes.

In response to questions from The Irish Times, a spokeswoman for the Department of Health said the 5km radius is not just for exercising and that driving within this zone is allowed.

She said: “Those who have been advised to cocoon, including those who are over 70 years ofd age, are advised to stay at home as much as possible.

“However, from May 5th, those who have been advised to cocoon may go out for a drive within 5kms of their home.”

However, the Government has stressed that people should only leave their homes to get some exercise, or for essential journeys such as to shop for food, obtain medicines or attend a doctor. Under the regulations, it is an offence for a person to leave his or her place of residence, unless the person has a “reasonable excuse” for doing so.

The Department has previously clarified that cocooning is advisory rather than mandatory and the State has no powers to sanction anybody who does not cocoon. This remains the case.

This drew an angry response from the retired Church of Ireland archbishop John Neill (74) who said both he and his wife were “extremely annoyed that we older people have been deceived and misled in the midst of” the current Covid-19 crisis.

He suggested there appeared “to have been a deliberate attempt to mislead in public advertising” by the Government on the issue.

On June 8th, the 5km limit will be extended to 20km, though social interaction between households will remain limited.

From that date people will be allowed to take part in outdoor sporting and fitness activities, involving team sports training in small groups (but not matches) where social distancing can be maintained and where there is no contact.

Not until July 20th will the restrictions on movement be lifted entirely.