Corkonians’ mix of sporting arrogance and insecurity a potent mix

All-Ireland hurling preview: back in the Hogan stand shouting for Cork 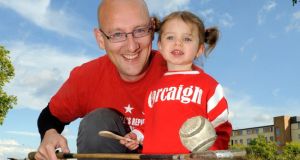 There’s a story in Cork about a taxi driver working at the airport who would greet tourists by saying: “Welcome to Cork, boy, the greatest city in the world!”

When one traveller asked him how he was so sure that Cork was the greatest city in the world, the taxi man promptly responded by saying: “Because I never left it.”

Cork people have an unusual mixture of arrogance and insecurity. It’s annoying to outsiders but it’s a particularly potent mix when it comes to sport. The arrogance manifests itself in their belief that winning is normal, to be victorious is natural and to lose simply means that something must have gone wrong on the day.

Folk memory
There’s also an insecurity that comes through in the relentless desire of Cork people not to be bested by anybody else, and to prove themselves, especially in sport and chiefly when it comes to hurling.

Even players who have no direct experience of success on the hurling field will still have a folk memory of it, passed on through years of tradition. Fans who have been starved of the same success will always look confidently to Cork’s next performance safe in the knowledge that if we get right then we’ll win the game.

You only really learn about your own county when you leave it behind for a while. In my case, having lived in Dublin for more than a decade, it’s hard not to feel a little disconnected from the buzz and excitement of the approaching All-Ireland senior hurling final.

In Dublin you miss out on the build-up back home. You don’t see the red and white flags in the towns and villages, and you’re cut off from the banter and gossip of the city until the crowds descend on the capital on Sunday.

This feeling of dislocation is not entirely unnatural for me, because growing up in my house my loyalty was not always exclusively to Cork. My dad, Justin snr, won All-Ireland medals with Cork as a player and coach but he also managed Clare, Antrim, Waterford and Limerick as well as a string of club teams both in the county and beyond.

As a child I was too young to recall his league successes as a coach with Clare in the ’70s, and I wasn’t even born when he helped to steer Antrim to an All-Ireland intermediate title, but I remember being a schoolboy in 1984 when Cork won the centenary All-Ireland.

The current Cork manager, Jimmy Barry-Murphy, was a player on that team, and my dad was the coach. When he brought the McCarthy Cup to our convent school in Passage West after the final the nuns made a terrible fuss of me, and everyone got a half day. Life couldn’t have been better.

Some years later I would find myself accompanying my dad to games around the country, not as a Cork supporter but as an ally in my dad’s corner, at training sessions for Cashel King Cormacs, carrying hurleys for the Clare minors, shouting from the stand for the Waterford senior hurlers or Limerick or whoever he was in charge of at the time.

My loyalty was always to him, and Cork, unfortunately, came second.

When he took over as Waterford manager in 2001 his first championship game in charge was against Cork the following year. It was a blistering, heart-stopping game which Waterford won by a point. They went on to win the Munster final, beginning their most successful period in the modern game.

Bittersweet results
There were further showdowns to come, great contests between Cork and Waterford, always with bittersweet results for me. I never looked forward to those games involving Cork, because coming from the county, knowing the psyche of the players and fans, you knew how difficult they were to beat.

Cork supporters never understood why I wouldn’t celebrate a Cork victory over one of my dad’s teams. Even now when I spend time back home, I almost find myself apologising for living in Dublin. My friends often ask if my job on Morning Ireland in RTÉ would ever allow me to “get back to Cork eventually”.

The idea that a Cork native could be happy living somewhere else is completely alien to a lot of Corkonians.

So this weekend, having spent years betraying my roots, I’ll be back in Croke Park wearing red and white.

I feel a bit like a returned exile. After 10 years living in Dublin, and an on-off relationship with Cork GAA, I’ll be back in the Hogan stand shouting for Cork again. It will be almost as good as coming home.