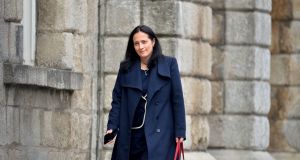 Minister for Arts and Culture Catherine Martin. Funding for the 2020 music industry stimulus package is being increased from €1m to €1.7m. Photograph: Alan Betson

The Cabinet is set to approve a new review of the State’s national development plan with a new 10-year timeline for key major projects.

The National Development Plan was due to run from 2018 to 2027 and pledged €116 billion for transport, water treatment, energy and other projects needed for the future.

Under a memo to be brought to Cabinet on Wednesday, the plan will be extended out to 2030 and a funding will be set.

Minister for Public Expenditure Michael McGrath was warned earlier this year that existing budgets may not cover the ultimate cost of mega-infrastructure projects like MetroLink, BusConnects and the M20 Limerick-Cork motorway.

As part of the review into the NDP, updated costs may be sought from departments and a spending ceiling for each department will then be set. The review will look at the appropriate amounts of funding across various areas such as housing, climate action and transport and will be consistent with the programme for government agreed between the three parties over the summer.

The review of the NDP will be finalised in the second quarter of 2021, it is understood. It will also look at the capacity within the public sector to deliver major projects.

It is also expected on Wednesday that the Cabinet will approve a number of new members for the Future of the Media Commission established earlier this year by Minister for Media Catherine Martin.

Prof Brian MacCraith, a former president of Dublin City University, will chair the commission. It will also include former editor-in-chief of the Guardian, Alan Rusbridger, as well as former broadcaster and Storyful founder Mark Little.

The Cabinet previously agreed the terms of reference as well as the membership of the commission, which will examine the future of broadcast, print and digital journalism at a time when the funding model used by the industry for many decades is no longer sustainable. The commission has been asked to report within nine months on how a strong, robust, independent media sector can survive into the future. Ministers will consider a number of additional members for the commission on Wednesday.

Cabinet will also hear an update on the work of a subgroup on insurance reform, and is likely to sign off on a new date when a revised framework for commercial and business customers will come into force.

The new regime, which will dispose of hundreds of different bands for water charges and replace them with just four levels, was due to be introduced earlier this year, but was stalled due to the impact of Covid-19. Cabinet will discuss a proposal to bring in the charges from May 1st, 2021.

Separately, Ms Martin has said the amount of funding for the 2020 music industry stimulus package is being increased from €1 million to €1.7 million. This followed an “exceptional number” of applications received to the open call for the music support grants which has been open for one month so far.

The package involves three funding schemes put in place to sustain the popular and commercial music sector. There is a songwriting stimulus, recording stimulus and album release stimulus.