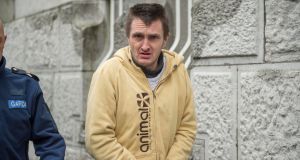 A man has been remanded in custody after he was charged over an attack on an 80-year-old man who tried to prevent the theft of money from a church collection box.

David O’Donovan (41) was charged with assault causing harm to the pensioner at St Augustine’s Church on the Grand Parade in Cork city centre on March 24th contrary to Section 3 of the Non Fatal Offences against the Person Act.

Gardai objected to bail and Det Garda Padraig Harrington said that one of the grounds that the gardaí were opposing bail was the strength of the evidence against Mr O’Donovan, a native of Monkstown but with an address at Glendalough, Grenville Place, Cork

“It is alleged that Mr O’Donovan entered St. Augustine’s Church at approximately 8.25pm on Saturday night when Mass was on and began breaking into a charity collection box and was confronted by the 80-year-old injured party.

“It is alleged that when was confronted by the injured party, Mr O’Donovan assaulted him by kicking him in the groin, knocking off his glasses and then stamping on the glasses on the ground and then punching he injured party into the left eye, cutting his eye.”

Det Garda Harrington said that the State would allege that the assault was witnessed by a Polish woman who was attending Mass at the time and that she intervened to try and stop the attack.

He said the Polish woman later identified Mr O’Donovan to him at the nearby Centra supermarket on the Grand Parade where he arrested him and brought him the Bridewell Garda station for questioning.

Mr O’Donovan’s solicitor, Frank Buttimer said his client was anxious to get bail as he had a heroin addiction but was currently on a methadone programme and going for counselling at Arbour House Treatment centre.

Det Garda Harrington accepted that Mr O’Donovan was on a treatment programme and he agreed that he had no history of violence but he did express concern that he might re-offend if granted bail.

“I accept he has no history of violence but he had no recollection of the event when it was put to him - this was a completely unprovoked attack on an 80-year-old man and my fear is that it could happen again if he is granted bail,” he said.