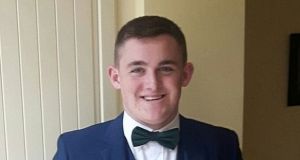 Jack O’Driscoll is a first-year Environmental Engineering student at Cork Institute of Technology.

The family of a teenager left paralysed following a freak accident during Storm Emma have spoken of their gratitude to the public after a fundraising appeal generated almost €100,000 in five days.

Jack O’Driscoll (19) from Mayfield in Cork suffered the serious injuries when he was playing with friends in the snow on a local soccer pitch before the Red Weather warning on March 1st last.

His cousin, Brian Punch, explained that Jack was out with friends and jumped into a pile of snow only to fall on his back and suffer a serious injury to his vertebrae in his neck which has left him paralysed.

“They were up in soccer pitches at the top of Mayfield, they were jumping into the snow and whatever way Jack jumped into a pile of snow, he just didn’t get out of it,” he said.

Speaking on the Neil Prendeville Show on Cork’s Red FM, Mr Punch told how the teenager’s friends rang the emergency services and his father Paul who raced to the scene when he heard what had happened.

The injured youth was brought by ambulance to Cork University Hospital with serious spinal injuries, but had to wait a day before he could be moved to the Mater hospital in Dublin because of the weather.

Mr Punch said that his cousin was remaining very positive in his outlook despite the fact that he is paralysed from the chest down and can only move his shoulders, upper back and his upper arms.

“All along he has been positive. He has been upbeat about things, he’s determined. Mentally, he’s got it all squared away. He’s very much keeping a positive frame of mind,” said Mr Punch. “It’s a waiting game, there’s movement in his shoulders and his upper arms but anything more we’re just waiting to see. It will be like that for the next couple of weeks.”

Mr O’Driscoll is a first-year Environmental Engineering student at Cork Institute of Technology.

“It was a completely freak accident . . . it was just a fall in the snow and it happened before any of the weather warnings or the curfew over Storm Emma kicked in,” said Mr Punch.

Mr O’Driscoll is a keen sportsman who played soccer with St Mary’s and hurling and Gaelic football with Mayfield. He is breathing with the aid of a ventilator but it is hoped this is a short-term measure.

Mr Punch said the hope is for Jack to go the National Rehabilitation Institute in Dún Laoghaire after he is deemed fit enough by doctors in the Spinal Unit at the Mater.

Mr Punch said that family set up a Go Fund Me appeal five days ago to try and raise €200,000 to assist his cousin with his rehabilitation and the family have been overwhelmed by the response.

“His parents, Paul and Deirdre and sister Loren (18) and all of us in the extended family have just been blown away by the response of people since we set up the Go Fund Me appeal,” he said.

We had planned all this for further down the line, maybe a couple of month . . . but even before we set anything up people were dropping envelopes up [to] CUH,” he added.

“People were texting us and we were saying we had to organise something so people had somewhere to go, somewhere where we could direct them and it’s just taken off.”

Anyone wishing to donate to Jack O’Driscoll’s rehabilitation can do by going to the Go Fund Me appeal here.