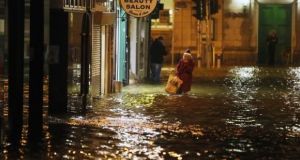 The €140 million Office of Public Works (OPW) plan to protect Cork city from flooding is likely to take five years to complete.

However, almost half of the scheme’s benefits are likely to be delivered in its initial stages when protective structures are put in place upstream of the city, it has emerged.

According to Ezra McManamon of the OPW, the first two phases of the Lower Lee Flood Relief Scheme will see major protective structures such as berms put in place upstream of Cork city centre with minimal disruption to city traders and those using the city centre.

The scheme, which the OPW have prepared in conjunction with consulting engineers Arup, is designed to protect some 900 houses and 1,200 businesses from flooding. It is also designed to protect against a 1 in 100 year fluvial flood and 1 in a 200 year tidal flood.

Speaking at a discussion entitled, “Flooding in the Cork Region - Impacts and Solutions” at Cork Institute of Technology, Mr McManamon said two thirds of flooding damage in Cork was fluvial or river in origin, while tidal flooding accounted for one third.

Work on the first two phases of the scheme from Inniscarra to the Kingsley Hotel and the Kingsley Hotel to the National Tyndall Institute, would consist of putting in place raised earthen berms and banks and would bring about approximately a 75 per cent benefit with regard to damage caused by fluvial flooding.

The works, which would also include putting in a choke or hatch downstream of the Kingsley Hotel to divert water away from the narrower South Channel to the broader North Channel at flood times, would thus bring an overall benefit of 50 per cent when it came combined as fluvial and tidal flooding.

Ken Leahy of Arup told the discussion that it is hoped to start construction work on the first phase - from Inniscarra to the Kingsley Hotel - in 2019 and it should take 18 months to complete as much of the work will have to be done over two summers when flows in the river are lower.

The second phase from the Kingsley Hotel to the National Tyndall Institute should take around 12 months but it may be possible to have some overlap with the first phase, while the final three phases in the city centre are likely to take a further 12 to 18 months to complete, he said.

“You are talking about somewhere between four and a half and five years so realistically if we start work with diggers on the ground in late 2019 on the Inniscarra to Kingsley section, you are talking 2025 before it’s completed,” he said.

Upon completion of the scheme, with berms to the west of the city and raised walls along the city quays, the ESB will be able to discharge water at a rate of 555 tonnes per second from Inniscarra to prevent any huge build up of water above the dam without causing any flooding in the city.

“Those early releases are only possible because we are putting in the defences. At the moment you have can discharge 200 tonnes a second without causing any flooding but if you hit peak capacity, you are discharging 800 tonnes a second which causes major flooding problems.

“With the defences in place, it will allow us that balance that out so that you can release more water before hand so you don’t end up with a situation where you have peak water levels being discharged and we will be able to do that without causing any flooding.”