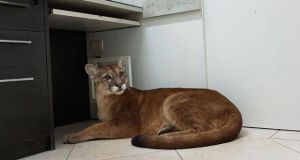 An animal welfare group has set up traps and surveillance cameras after receiving several reports of a cougar or puma being seen in parts of Co Cork over the past fortnight.

Vincent Cashman of the Cork Society for the Prevention of Cruelty to Animals said the reports they had received of a cougar being seen near Fountainstown and Crosshaven had yet to be confirmed.

However he said that while the sightings were “out of the ordinary but not impossible”, the CSPCA felt that they had to give them credence such was the adamant belief of those who contacted them.

Speaking on the Neil Prendeville Show on Cork’s Red FM, Mr Cashman said it was possible that a cougar or puma had been brought into Ireland illegally as a pet and escaped from its owner.

“We’ve had no confirmation yet this is a puma but the people we have been dealing with are very credible - it is a very large cat and the reports we’ve received have been too credible to ignore.”

Mr Cashman said cougars are solitary animals and tend not to confront people and while they had received no reports of any sheep being attacked, cougars could live off smaller animals like rabbits.

“We have trail cameras set up in areas where this animal has been seen passing so as soon it passes, it starts filming so we have it on film and we have infra red as well so it picks it up at night as well.”

Mr Cashman said that the CSPCA was continuing to monitor the trail cameras and ultimately hoped to trap the animal and establish what exact species it was, but that could take some time.

“Our ultimate goal is to trap it but at the moment, there are too many rabbits around and plus there’s a bad bout of myxomatosis going around, so catching rabbits is much, much easier now.”

“When the myxo dies off a little bit, and the rabbit population normalises, then he may find getting food a little bit harder and so he may be encouraged towards our traps,” said Mr Cashman.

The nearest wildlife park to Crosshaven and Fountainstown is Fota Wildlife Park on the other side of Cork Harbour but Fota does not have cougars. It does keep lions, tigers and cheetahs.

In June 2017, the PSNI posted a warning on its Facebook page about sightings of a possible panther in the Newry area and urged people not to approach the animal if they saw it.

The PSNI and the Ulster Society for the Prevention of Cruelty to Animals began hunting for a suspected puma in August 2003 after a large animal killed a pedigree ram on a farm in Co Antrim.

According to Stephen Philpott of the USPCA, there were also sightings of wild cats around the same time in Derry and Tyrone, where a newborn calf was killed on a farm near Cookstown.