‘Not science fiction’: Surgical submarines and the nano-revolution

Nobel Prize winner predicts that in 50 years, robot ‘surgeons’ will be injected into veins 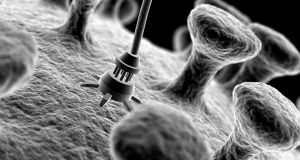 ‘I don’t think it is science fiction’. File photograph: iStock

The distinction between biology and chemistry will fade away in future years, Nobel prize winner Prof Bernard Feringa said at the Schrödinger at 75 conference. This would lead to a world of tiny machines, surgical submarines, self-repairing cars and light activated antibiotics, he predicted.

Prof Feringa is an organic chemist at the University of Groningen, the Netherlands, who was awarded the 2016 Nobel Prize in chemistry for designing and making molecular machines.

He predicted a nano-revolution resulting from the building of tiny switches and motors, smart medicines and self-cleaning materials.

Prof Feringa has already made some tiny nano-machines a reality (a nano-metre is one-billionth of a metre). He has used carbon “nano-tubes” to make a nano-submarine and powered it using two enzymes from nature.

“It is a sort of rocket-propelled submarine. The only thing I have to do is add sugar water and it moves autonomously,” he said – showing a video of his tiny sub.

“My prediction is that 50 years from now surgeons will be injected into blood veins,” he said. “Not all surgeons. These will be nano-robots and they will go look for defective cancer cells or deliver a drug or do some repairs.”

The professor has made self-healing materials and is optimistic such materials will be with us soon.

“Within 10 years we will have cars with coatings that when you scratch them, you won’t have to go the garage any more. Just wipe it with a cloth and tiny capsules will pop open, light comes in and it repairs,” he said.

He said the possibilities for chemists to create new compounds and new materials are boundless.

“We have the periodic table of elements. Our playing field is endless and we have only scratched the surface,” he said. He encouraged young people to get involved in science as this was critical to ensuring the new nano-world became a reality.

He has also created switches on the nano-scale by taking a broad-spectrum antibiotic, which is widely used, and built a light switch into it. The antibiotic was inactive without light.

“If you take that antibiotic, it doesn’t harm good bacteria, for instance in our gut. When we switch a red lamp on it does the job,” he said. In this way a light source could be used to activate the antibiotic in specific places in the body.

“We are not in the clinic yet, but there will be smart drugs [LIKE THIS],” he said. Prof Feringa emphasised that the body is the true expert in making tiny moving machines.

After describing a nano-submarine capable of entering the bloodstream of patients, Prof Feringa said: “I don’t think it is science fiction. I am not very good at prediction, so the best way to predict the future is to invent it. That is what we do together as scientists.”