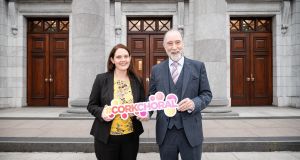 Some 50,000 visitors are expected to attend over 100 scheduled events which are part of the Cork International Choral Festivaland this weekend

The festival, which kicked off on Friday night, is 65 years old, gives a €10 million boost to the Cork economy.

Director John Fitzpatrick’s participation only goes back to 1969 when, as a member of the UCC Choral Society, he participated in the festival for the first time . “I was a bit of a bastard tenor - I was too high to be a bass and too low to be a decent tenor and at the time, we were a college choir of no great ability and in fact, I have no memory of how we fared but it whetted my appetite and started my whole involvement with choral music,” he says.

A music student at UCC at the time, Mr Fitzpatrick went on to teach music in Fermoy before later becoming Director of the Cork County VEC School of Music and all the while his involvement in the festival grew from serving on the artistic advisory board in the 1980s to becoming Festival Director in 1993.

“The whole format of the festival has changed a lot since I started being involved - the format then was very much City Hall based with a mixture of national and international choirs so you could have three or four competitions on the one night which made it very difficult to judge.”

Conscious of the need to provide variety to attract audiences each of the five nights of the event, he has seen the festival evolve into a much more eclectic event where there is something different on every night while it has also expanded out from Cork City Hall to some 90 venues in the city and county.

Further information on this year’s festival, which runs until May 5th, is available at www.corkchoral.ie.