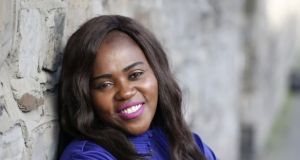 Ms Kisyombe will revise her campaign literature to properly reflect her history and circumstances and has also corrected the chronology of her back-story. Photograph Nick Bradshaw

The Social Democrats local election candidate Ellie Kisyombe will proceed as a candidate following a review of her case.

Allegations of inconsistencies in the background history of Ms Kisyombe surfaced in February. Ms Kisyombe is originally from Malawi and has spoken of her experience of living in the direct provision system for much of the last decade.

The party commissioned an independent review into her candidacy which completed last month. Sources have said that further explanations were sought from Ms Kisyombe over the last week. She is understood to have complied will all requests for additional information.

A meeting of the party’s national executive was called yesterday to discuss her situation.

In a statement, a spokesman for the party said Ms Kisyombe has agreed to alter her election literature following the review.

“The National Executive of the Social Democrats has completed the independent review process into the candidacy of Ellie Kisoymbe for Dublin’s North Inner City constituency.

“Following a number of recommendations arising from the review, the candidate has undertaken a series of commitments including revising her campaign literature to properly reflect her history and circumstances. The candidate has also corrected the chronology of her back story to the satisfaction of the National Executive at this time.

“Following the completion of the independent review, and subsequent undertakings from the candidate, the National Executive of the party are happy for the candidate’s campaign to proceed for the 2019 Local Election in the Dublin North Inner City constituency.”

Her candidacy has sparked internal divisions within the party, multiple sources have said.

In February, an article in the Sunday Times alleged Ms Kisyombe had arrived in Ireland in April 2011 and secured a student visa, before travelling to the UK and claiming asylum there. Ms Kisyombe has claimed that she sought asylum immediately after arriving at Dublin Airport.

After the article was published, three members of the Social Democrats national executive resigned, including its chair and deputy chair, Joe O’Connor and Carly Bailey. A third member, Chris Bond, also resigned.