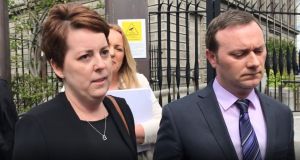 Ruth Morrissey and her husband, Paul, outside the High Court after winning her court case over misreadings of her cervical smear tests. Photograph: Michelle Devane/ PA Wire

Labs carrying out screening programmes should have “absolute confidence” in their decision if they are giving a sample the all-clear, a High Court judge has ruled in the first CervicalCheck case to go to judgment.

The threshold set by Mr Justice Kevin Cross in a case where he awarded Ruth Morrissey and her husband, Paul, damages of €2.1 million, is expected to be applied in dozens of other cases of alleged misreading of smear tests. It will be closely studied by those concerned that negligence awards might negatively impact on the State’s ability to run screening programmes.

Smears taken in 2009 and 2012 from Ms Morrissey, who has cervical cancer and has been given a prognosis of two years, were inaccurately read by two separate laboratories, one in the US and one in Ireland.

The judge awarded damages of €10,000 against the HSE for its failure to inform Ms Morrissey of the results of audits conducted in 2014, which found that her 2009 and 2012 smears had been inaccurately read. The audits were conducted after she had developed cervical cancer.

Speaking after the ruling, Ms Morrissey said she had not expected to have to take her case to court because of what had been said last year by Taoiseach Leo Varadkar about settling the CervicalCheck cases without the women having to go through the adversarial legal process.

“At the time I thought it possible to settle all cases through mediation,” Mr Varadkar said in response to Ms Morrissey’s comment. The Government hopes legislation establishing a tribunal that can hear the women’s cases in private will be passed by the summer.

Ms Morrissey’s case ran for 37 days and MedLab has now indicated it is going to appeal.

The CervicalCheck controversy first came to public prominence when Vicky Phelan settled her case for €2.5 million in April of last year.

In his judgment on Ms Morrissey’s case, Mr Justice Cross said the Quest Diagnostic screeners had given her 2009 sample the all-clear “utilising their professional skill and judgment and recording what they believed as a matter of probability was the case”.

However, in doing so they had not met the “absolute confidence” test and were negligent in not coming to a different decision on the basis of “irregularities” that a competent screener should have seen on the slide.

None of the screeners who viewed Ms Morrissey’s samples for the two laboratories were called by the laboratories to give evidence.

A spokesman for the State Claims Agency said as of mid-February, 92 claims against the State had been received in respect of the CervicalCheck controversy. The HSE contracts with the screening companies includes an indemnity clause covering negligence.