Contents of Central Bank’s office go under the hammer

Furniture and antiques dealer Niall Mullen talks us through items for sale in what is thought to be one of the biggest such auctions in the State, with almost 4,000 separate objects from the Central Bank building put up for sale. Video: Conor Pope 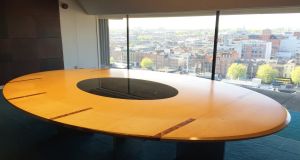 One of the Klimmek-designed tables from the seventh floor of the former Central Bank building in Dame Street which went on sale at The Heritage Resort, Portarlington.

CA group of middle-aged men stood unhappily beside a table where many of the decisions which shaped modern Ireland were taken just as an auction of the contents of the old Central Bank got under way.

“It’s a crying sin,” one man, who would only be identified as Oliver, whispered. “I mean just look at it, it’s brand new. Why wasn’t that table good enough for them any more?”

Until last month, the table that was so annoying Oliver was in the boardroom on the seventh floor of the Central Bank on Dame Street. But, having been deemed surplus to requirements when the bank moved across the river to its high-tech new headquarters, it - and close to 5,000 other pieces of office and kitchen equipment - went under the hammer at the Heritage Hotel just outside Portarlington on Tuesday morning.

It was expected to fetch between €5,000 and €7,000, making it by far the priciest item on the ticket. Most of the other - lots including “a bag of phones”, attracted bids measured in euros rather than thousands.

When the auction started, the large ballroom was sparsely populated with only 50 or so people sitting on soon-to-be-sold chairs for what was billed as one of the largest auctions in the history of the State.

All the action, organisers said, was happening online.

Many in the room were there to kick metaphorical tyres. Eve Daly was one such tyre kicker. “My son is home-schooled three days a week and I thought an auction would be a very good educational experience,” she said, as the son in question stood at her shoulder looking bored.

She sat on a luminous purple couch. “Oh this is very lumpy,” she said. “It’s clearly been very well used”.

Then a beanbag caught her eye. “That is very sad looking,” she whispered to her child. “It could really do with more beans.”

Niall Mullen, the man who hired 25 articulated lorries and spent €40,000 on extracting the contents from the Central Bank - including the bean bag - was oblivious to criticism of his newly-acquired stock.

“I have been blown away by the publicity the sale has attracted,” he said. “There is no question that the Central Bank was right to sell the contents to me. I did tax payers and the bank a huge favour. I challenge any of the naysayers to say the bank did not get good value for money.”

And how much did he pay for the stock? “I am not at liberty to say,” he said. “I signed a confidentiality clause.”

The auction got under way with the sale of computer monitors. A thousand monitors, to be precise. The auctioneer promised to throw in a mouse and a keyboard with every sale and started the bidding at €30. There were no takers and the price fell to €20 before a hand was raised.

Under the auction rules, anyone who successfully bid on one lot could buy as many similar items at the same price. The first winner bought three monitors at €20. Next up was another monitor. It went for €15 with the successful bidder taking five.

So it went for about 25 minutes until bidding slowed. That allowed an online bidder to buy a monitor - and a mouse and a keyboard - for just €5. He then took the remaining 900 monitors at the same price.

Wooden lockers sold for around €60 each while hundreds of metal filing cabinets attracted prices of between €60 and €80.

Mullen was happy enough as the sale continued. “This has been a job of biblical scale but we’re nearly finished now,” he said. “And not before time. When I am stressed at night and can’t get to sleep, I don’t count sheep any more. I count filing cabinets.”