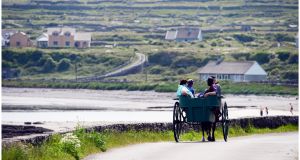 Inis Mór the largest of the Aran Islands. “What we need now is two weeks of constant rain on the islands to replenish supplies,” said Ger Greally of Irish Water. Photograph: Bryan O’Brien

Aran Islanders could be facing the most serious drought in years due to a dry spring which has drained reservoirs of water.

Irish Water says it is “very worried” about supplies currently on two of the three islands – Inis Mór and Inis Oírr – while Inis Meáin is not quite so critical.

Supplies are being cut between 9pm and 8am on Inis Mór and Inis Oírr, and a conservation notice remains in place for the middle island.

He said that preparations were being made to ship water out unless there was intensive rainfall.

“Tankering water out by ship is only part of the solution, as the demand on Inis Mór in particular is so high, Mr Greally said.

An “audit” of the situation on Inis Mór is due to be conducted shortly, he said, and planning permission has been sought to construct storage tanks on Inis Meáin and Inis Oírr for next year.

“What we need now is two weeks of constant rain on the islands to replenish supplies,” he said.