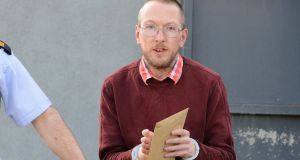 A woman who wrongly identified a man as a sex offender in her town – leading him to require Garda protection – has defended her actions.

Last Friday, David Murray, a civil servant from Dublin, was confronted and threatened by a large group of people in Monasterevin, Co Kildare, before gardaí escorted him out of the town for his own safety.

Mr Murray had been house hunting in Monasterevin that week at the same time that false rumours began to spread online that he was convicted child sex offender Anthony Luckwill. Some locals also shared a picture of Mr Murray claiming it was Luckwill.

A parent who lives in the town spotted Mr Murray on Friday evening and posted to Facebook that she had seen Luckwill.

In response, another poster suggested they “get a few lads down to kick the shit outta him”.

Mr Murray was confronted by a mob shortly afterwards, forcing him to seek refuge in a pub and call gardaí.

An hour later, the parent posted: “Appears the linch (sic) mob have done there job.well done monasterevin. guards have just taken him away.hopefully never to return.”

On Tuesday, the woman told The Irish Times she was “deeply saddened at the outcome of this whole situation” but that it was “better to be safe than sorry”.

However, she said gardaí should have told Mr Murray earlier in the week that he was being mistaken for the child abuser.

“I don’t condone violence of any sort, but personally think this could have been prevented if the gardaí had have stepped in sooner,” she said. “I think they should have made Mr Murray aware of what was going on and who people were mistaking him for.”

Mr Murray said he intended to make a criminal complaint to gardaí about those who claimed he was Luckwill. He said he was also considering taking defamation proceedings in the civil courts.

The woman said she was not concerned about legal consequences. “I’ve not done anything wrong. I contacted the guards.

“I was very concerned and I just hope Mr Murray can understand that as a concerned parent I was deeply worried for the safety of the kids as I am sure he would have been if the shoe had have been on the other foot.”

According to Andrea Martin, a partner in solicitors’ firm MediaLawyer, Mr Murray may have a strong case for defamation if “he can trace exactly who it was who posted his photograph online and said he was a paedophile”.

“This can involve a court application in itself getting Facebook to disclose who made the posting. And if they don’t have the full details or if a pseudonym was used, the order to disclose made against Facebook may not be much use to the claimant.”

Those who shared Mr Murray’s location and claimed he was Luckwill may also be criminally liable for incitement or conspiracy to commit an offence.

“To incite other people to come together to assault another person would be an offence,” Ms Martin said.

Groups which work with sex offenders and victims of sex crime warned against vigilante justice which only made it harder to monitor offenders.

“This type of behaviour actually drives people underground, so instead of protecting children it’s actually making children more vulnerable,” said the executive director of One in Four, Maeve Lewis.

Joan Cherry, of the Northside Interagency Partnership, which works with youths who have sexually offended, said ostracisation and isolation of sex offenders could make them more likely to reoffend.

“It actually has the opposite effect of what people think. It actually increases people’s risks within their communities.”