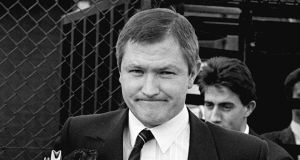 Pat Finucane – the UK Supreme Court ruled that investigations into the fatal shooting of the solicitor have not been effective and fell short of international human rights standards. File photograph: Pacemaker

The UK Labour party has urged British prime minister Boris Johnson to “act without delay” and order a public inquiry into the murder of Belfast solicitor Pat Finucane.

Mr Finucane (39) was shot by loyalist paramilitaries in front of his family in 1989 amid claims of collusion with state security forces.

In February last year, the UK Supreme Court ruled that investigations into the fatal shooting of the solicitor have not been effective and fell short of international human rights standards.

Northern Ireland Secretary Brandon Lewis has indicated that a decision over how the British government will proceed will be announced next month.

Shadow secretary of state Louise Haigh met with the Finucane family last week and has pledged her support.

Ms Haigh has now written to Mr Johnson pressing him to call a public inquiry.

“That this crime could happen at all in our country is shocking; that it has never been investigated to a lawful standard is unjustifiable,” she wrote.

“The delay by the Secretary of State [in reaching a decision on complying with the law] has added insult to injury.

“It is my view, and the long-standing view of the Labour Party inside and outside of government, that an independent public inquiry is the only remaining mechanism which can establish the full truth and deliver on promises made to the family.

“The long years which have passed since the ceasefire and the Good Friday Agreement have served to demonstrate that, unless justice is done, and seen to be done, the wounds of the past simply will not be allowed to heal.

“I therefore urge you to act without delay.”