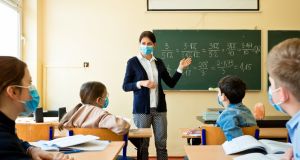 Covid has been found to have spread significantly in fewer than 10 schools, says Nphet. Photograph: Getty Images

Covid-19 is found to have spread significantly within fewer than 10 schools in the State, public health authorities believe.

While there have been a total of 110 recorded clusters or outbreaks detected in schools since they reopened in late August, authorities say transmission in most cases is likely to have happened outside school settings.

A briefing document prepared by the National Public Health Emergency Team (Nphet) and the Health Protection Surveillance Centre says very few schools are likely to have had “intraschool transmission” or cases spread within schools.

The trend will be seen by the Government and school leaders as an encouraging sign that safety precautions within schools are helping to limit the spread of the virus.

In cases where the virus has spread among pupils in school, it is “most likely” to have occurred in fewer than 10 schools. In these cases, the numbers of further spread have been “very low” with one or two cases mainly.

The document was prepared by public health authorities in response to a series of school safety questions from the Association of Secondary Teachers Ireland (ASTI).

The union is due to receive the results of a ballot for industrial action over concerns it has over the safety of staff towards the end of this week.

The ASTI has raised concerns over testing and tracing turnaround times and “inconsistencies” over the definition of close contacts in schools .

In the document, public authorities acknowledge that contact-tracing service have been under increased pressure with the recent rise in detected cases.

The median time to complete all contact-tracing calls in the past week or so was just under four days, it says.

Public health authorities also confirm that they intend to help expedite contact with schools through the establishment of 10 dedicated teams around the country linked to the public departments which will be the focal point for the local schools.

The document also rejects claims that there has been a lack of consistency around the definition of close contacts in schools.

It says a public health risk assessment is undertaken in each case where a positive case has been detected among a member of the school community which determines how many close contacts there are. It said this will vary depending on local circumstances.

“The definition of close contacts within the school setting will be variable. It will not be automatically assumed that a whole class will be deemed as close contacts,” it states.

“This is because the school settings are so varied e.g. in young primary school children, ‘pods’ will likely be deemed close contacts and all removed.

“In secondary settings where there is social distancing rather than a ‘pod’ per se, close contacts will be determined by proximity and interaction with the index case; class placement; classroom structure; common travel; social networks and friendship groups.”

Many teachers have queried why in some cases they have been told to disregard alerts from the official Covid tracker app after a positive case has been identified in a school.

In response, the document states that the app, which identifies close contacts, has caused some confusion when schools are also assessed under the public health risk assessment.

It says the app information helps inform the risk assessment, which involves a broader assessment of settings where a case has been detected.

As a result, it is the determination from the risk assessment – incorporating the app data – which is used.

It said the HSE is in the process of updating information on the app so staff in such schools are aware that a different determination might be made following a risk assessment.

The response adds that the average number of close contacts is five for those tested as part of mass testing in schools.

On average, the number of close contacts per individual case in the community setting is 4.4.